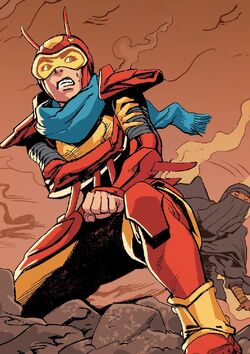 I am the Locust! I protect the lost, the wandering and the nomadic! I am a friend to the forlorn and an ally to all!

Fernanda Rodriguez is a vigilante known as the Red Locust from San Diego, California. She is the only child of a family with a centuries-long tradition whereby a group of Aztec trackers, known as the Locust Brotherhood, had passed down symbolic armor to firstborn sons named Fernando, in honor of the first king of Spain, to protect nomads, vagabonds, and runaways.

Her mother died before bearing a son; however, the Brotherhood was convinced to give the girl a chance to prove herself. Fernanda then studied hydraulics and exoskeletons to significantly upgrade the ancient armor, making it bulletproof and allowing for super strength, leaps, and kicks. The Red Locust of each generation had received requests at the Immaculate Conception Church and then tracked down the missing loved ones. During her first such mission, Fernanda encountered Viv while chasing Mateo Garza. The Synthezoid was in town keeping tabs on the Freelancers in nearby Coronado and the two teamed up to take down Mr. Gloom's child trafficking and drug manufacturing operations.

Impressed by Fernanda's dedication to helping the less fortunate, Viv made her an honorary Champion and pledged to petition the team for full membership on her behalf.[2] The Red Locust later encountered Patriot and Falcon in Mexico's Sonoran Desert where they assisted a group of migrants left trapped in a hot vehicle by coyotajes. The group was soon ambushed by the smugglers, but the sudden arrival of Ms. Marvel and Spider-Man helped to turn the tide in their favor, and the trio were subsequently recruited by the Champions.[3]

After the government passed "Kamala's Law" which outlawed individuals under the age of 21 from being a superhero, Locus was one of the individuals who were apprehended by C.R.A.D.L.E..[4]

Like this? Let us know!
Retrieved from "https://marvel.fandom.com/wiki/Fernanda_Rodriguez_(Earth-616)?oldid=5758260"
Community content is available under CC-BY-SA unless otherwise noted.