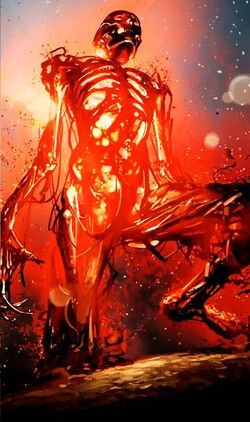 Fever Pitch was once a handsome young man, but when his mutant powers manifested, he inadvertently destroyed his own face. As the years went by and his powers became stronger, he eventually burned through his entire body, leaving him a fiery skeleton. He became a member of the incarnation of Gene Nation organised and led by the Dark Beast. He was ordered to capture the members of Generation X and successfully apprehended both Chamber and Skin.[1] Nate Grey, Emma Frost, and the new student Gaia battled the collected Gene Nation to free the members of Generation X. In the ensuing fight, Nate Grey siphoned off Fever Pitch's energy, seemingly killing him.[2]

Fever Pitch resurfaced in Berlin.[3] The criminal fought Abyss to try and capture him and sell him to researchers who wanted to dissect him. The battle was interrupted by Avalanche, Blob, and Surge of the X-Corps who took the two men prisoner. Once inside of Banshee's facility, Fever Pitch was mind-controlled by the imprisoned Martinique into serving the X-Corps... or so it seemed. When Mystique revealed herself to have infiltrated the facility Fever Pitch joined her group of rebels on a rampage through Paris to show the populace the true face of mutants. Fever Pitch was about to burn down the Louvre, but the timely arrival of the X-Men—specifically Iceman—thwarted his efforts.[4]

Fever Pitch not only kept his powers after the "Decimation" of the mutant population, but the government considered him a 'Severe' national security threat.[5] He came to live in the tent city located on the grounds of the Xavier Institute. He was assigned to share a tent with Toad, but he preferred the company of Erg, Sack, and Mammomax. He was one of the many mutants to have a "tracking" chip implanted in his head before a trip into Salem Center. When the chip's true nature was discovered he had it removed by Mr. M, who he followed when he led an exodus from the institute.[6]

During Apocalypse's attack on the institute he was seen siding with Apocalypse along with Skids and Scalphunter inside the Sphinx.[7]

Fever Pitch was one of the many mutants that revolted against Sentinel Squad O*N*E* during Domino and Shatterstar's attempt to release the mutants "relocated" at the Xavier Institute.[8]

Fever Pitch was later captured by the anti-mutant extremist group the Sapien League and injected with a dose of the Legacy Virus. Released in Jackson Hole, Wyoming, his powers overloaded, killing hundreds, including himself.[9]

Like this? Let us know!
Retrieved from "https://marvel.fandom.com/wiki/Fever_Pitch_(Earth-616)?oldid=5431819"
Community content is available under CC-BY-SA unless otherwise noted.