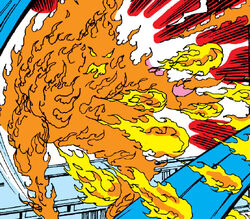 They were first seen in the modern age when the ancient alchemist stole the Tailsmans from various museums around the world and used the Elementals to try and destroy his long time foes the Fantastic Four. Each member was forced to fight an Elemental that countered their powers perfectly. It wasn't until the Fantastic Four's leader Mister Fantastic suggested they swap foes were the Elementals seemingly destroyed. With the aid of Doctor Strange, Diablo was apprehended and the Tailsmans confiscated.[1]

Sometime later, Diablo attacked the Fantastic Four again with the Elementals, seemingly without the aid of the Tailsmans of Power. In addition to Fire, Air, Water and Earth, Diablo also included his latest creation the Trans-Mutant. However this time Diablo and his Elementals were defeated by the Fantastic Four and their allies Crystal and Ms. Marvel. When Sharon knocked Diablo unconscious the Elementals all vanished.[2]

Years later, the original Tailsmans of Power ended up in the hands of a Chinese despot known as Tarru who used the Elementals to amass a prison of slaves. When the Asgardian known as Valkyrie ventured into Taaru's domain, he sent the Elemntals to capture her. Made prisoner, Valkyrie broke free and battled Taaru and his minions. Ultimately, Valkryie won the battle, smashing the Talesmans into pieces, causing the Elementals to vanish. Valkyrie then left Taaru to the mercies of his former slaves.[3]

Body made of fire, fire control.

Like this? Let us know!
Retrieved from "https://marvel.fandom.com/wiki/Fire_(Elementals)_(Earth-616)?oldid=5123959"
Community content is available under CC-BY-SA unless otherwise noted.