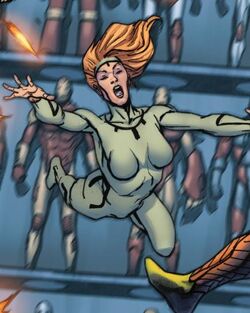 Amanda was one of the numerous people to have assumed the Firebrand moniker, and the first to be a woman. She first surfaced when the Mandarin assembled an army of villains of Iron Man to do his bidding.[2] Together with Crimson Dynamo, Firebrand was sent to wreck havoc in Charlotte, North Carolina. Iron Man confronted both villains and managed to subdue them. However, the Detroit Steel Corps arrived at the scene and opened fired on Firebrand and Crimson Dynamo, heavily injuring both of them. Afterward, the Detroit Steel Corps took them prisoners.[3] Amanda would reapper months later at Mandarin City, and was sent along with the rest of the Mandarin's minions on missions to steal resources to build the Titanomechs.[4]

Following the Mandarin's death,[5] Firebrand started working as a mercenary. After Iron Man embarked on a journey to destroy all samples of the Extremis virus that had been sold by A.I.M., one of A.I.M.'s clients, the Colombian cartel boss Juan Carlos Valencia, employed Firebrand along with the Living Laser and Vibro to protect his sample. Iron Man infiltrated Valencia's mansion using a stealth armor, but was eventually confronted by the three villains. He managed to knock out Firebrand and Vibro with a sleeping gas.[6]

During an invasion on Earth by the Mad Titan Thanos, most of the Avengers were away due to a concurrent crisis off-world, leaving their base of operations, the Stark Tower, mostly unguarded. Firebrand was one of the several villains of Iron Man gathered by Spymaster as part of his plan to assault the building. His other accomplices were Whiplash, Blizzard, Whirlwind, Unicorn and Titanium Man.[1] Once inside Stark Tower, Spymaster used teleporter discs to send some Iron Man Armors to his buyers. He also used one on himself, leaving Firebrand and the rest to be found out by a few super heroes who were present in the building. The villains managed to defeat the heroes, and the Titanium Man offered to use a teleporter in his possession to take them to Spymaster. After arriving at a Kree spaceship, Titanium Man knocked out Firebrand and the rest, revealing that he was the Kree captain At-Lass, and Spymaster's buyer.[7] Firebrand and her peers managed to escape imprisonment, and subsequently joined forces with Iron Man after he had arrived at the ship, having become aware of the robbery. After Spymaster and At-Lass were killed, Blizzard froze himsef with Iron Man to give his allies time to escape.[8]

Plasma Blasts: She has the ability to project powerful blasts of energy of different intensity.

Flight: Using plasma blasts as as a method of propulsion, Firebrand can propel herself in the air.

Like this? Let us know!
Retrieved from "https://marvel.fandom.com/wiki/Firebrand_(Amanda)_(Earth-616)?oldid=5754958"
Community content is available under CC-BY-SA unless otherwise noted.