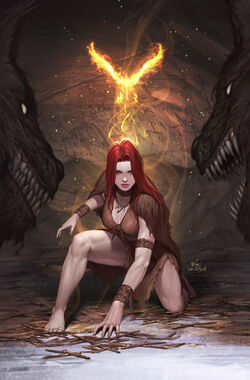 As an infant, Firehair was abandoned by her parents at the "Burnt Place" - a permanently razed clearing where the xenophobic surrounding tribes sacrificed anyone who deviated in any way from their norms - due to her red hair. Rescued by a pack of wolves, she grew up as a member of the pack - occasionally returning to the Burnt Place to chase the giant buzzards that dwelled there. When she was ten, Firehair discovered a child with one eye had been left at the Burnt Place, and was confronted by a floating man who spoke to her with his mind. Initially fleeing in fear, she later followed the man out of curiosity and befriended him, learning that he could only communicate via telepathy and move using psychokinesis. Reluctantly leaving her pack, Firehair joined the Tribe Without Fear - a collection of mutants that the man - who Firehair called the Highwalker - had rescued from the Burnt Place and taken upon himself to raise and train.

Some time later, Firehair's own mutant abilities awakened just in time for her to warn the Highwalker of an impending attack by the neighboring xenophobic tribes. As Highwalker attempted to talk down the tribesmen to buy his charges time to escape, Firehair's newly awakened psychic abilities were overwhelmed by the humans' fear and rage, resulting in the Highwalker's death when he dropped his guard to soothe her. Firehair fainted as her fellow pupils gave into rage and attacked the attacking tribesmen, resulting in the deaths of everyone present save herself. Firehair blamed herself for her mentor and friends' deaths and was overcome with despair, contemplating turning her powers on herself to commit suicide and returning to the Burnt Place to be eaten by the buzzards. As she lay awaiting death, the Phoenix Force - who had created the Burnt Place when it first arrived on Earth - manifested and saved her from the buzzards. Drawn to Firehair's untapped raw psychic power, the Phoenix bonded to her and sought to use her to fulfill its intended purpose - razing planets to ashes. Consumed by vengeful rage, Firehair nearly gave into the firebird's bloodlust and became a Dark Phoenix, but was pacified by the wolf who had saved her as an infant and decided to use her powers to protect those weaker than herself rather than destruction.

Years later, Firehair recruited the Asgardian deity Odin Borson - intent on forming an alliance with other supernatural and mystically-augmented beings.[1] Together, she and Odin recruited the demigod sorcerer Agamotto, the Black Panther - chief of the Panther Tribe, the demonically-empowered Ghost Rider, Fan Fei - first wielder of the Iron Fist, and Vnn - bearer of the cosmic Starbrand. One of the most-powerful enemies the Avengers battled was the Fallen, an out-of-control Celestial who unbeknownst to them was corrupted by the Horde. During the Avengers' battle against the corrupted cosmic god, Firehair struck the Fallen with flames hot enough to melt a supernova, but it withstood her attack without as much as a scratch. The Avengers eventually defeated the Fallen and sealed in an underground chamber in what would become the modern-day country of South Africa.[2] Afterwards, Firehair and her allies battled the First Host sent to judge Earth,[3] and went on to face many other threats to the Earth; the devil Mephisto and his minions, time-travelling would-be despots,[5] and a young Thanos among them.[6]

What ultimately became of Firehair is unknown, though she entered into a romantic relationship with Odin and survived for longer than any of her comrades, save for him.[7] She seemingly stopped being the Phoenix Force's avatar at an unknown period of time and eventually died, her essence being preserved inside the White Hot Room with the other Phoenix avatars.[8]

The Phoenix Force kept Firehair's consciousness suppressed in the White Hot Room, but she nevertheless exerted a degree of subconscious influence over it - causing it to instinctively seek out hosts from Earth - with a preference for red-haired women with psionic abilities.[9] As such, Firehair proved to be the first of many human mutants to host the Phoenix Force, with Jean Grey, Rachel Summers, and Hope Summers following in her footsteps.[8]

When the time-displaced teenage incarnation of Jean Grey refused to become the Phoenix Force's avatar, it trapped her in the White Hot Room -- where Firehair and the other former avatars battled her.[8] Jean managed to escape, and the firebird withdrew when Jean's adult incarnation -- which it had resurrected -- also refused to become its host again.[8]

After the Phoenix Force returned to Earth and set up a tournament amongst Earth's heroes to determine which of them would become its next avatar,[10] Thor confronted it. Manifesting the form of Firehair, the Phoenix revealed that Odin had lied to Thor about the truth of his parentage and that he was actually Odin and Firehair's son.[4] Thor accused Firehair's manifestation of lying to him, but she insisted that Odin had lied to him about Gaea being his birth-mother to ensure he would always seek to protect the Earth, telling Thor to submit and feel the fire of his mother's love.[9] However as the Avengers tried to submit the Phoenix Force to defeat, Thor grew protective of her and went mad. The Phoenix Force in the form of Firehair said goodbye to her son and wished they had more time to nurture their love. She said that whatever she is doing is for the good of her son and if she survives whatever that's coming, she will tell Thor the entire story about his birth. She merged with the Phoenix Force again and went to the body of Maya Lopez. [11]

As a child, Firehair was initially feral - having been raised by a pack of wolves. Sensing a kindred spirit in the Highwalker, she reluctantly left the only family she had known behind and became one of his pupils. When the awakening of her own mutant powers unintentionally caused the deaths of the Highwalker and her friends, Firehair became suicidally depressed until she was found by the Phoenix Force. Upon bonding to it, Firehair gave in to her rage and hatred, embraced the firebird's bloodlust, and vengefully set out to raze the world as a Dark Phoenix. Pacified by the wolf that had saved her as an infant, she instead chose to dedicate herself to protecting humanity both from itself and from malevolent supernatural forces.[1] As an adult, Firehair enjoyed teasing her comrade and lover Odin over his initial inability to control the recently-forged Mjolnir.[2] Despite using her powers for good, she possessed a love of combat and destruction, suggesting to Odin that she could immolate anyone and anything who stood in their way with her cosmic flames. She and Odin remained comrades and lovers for some time after the other Stone Age Avengers perished.[7] Her consciousness through the Phoenix Force seemed caring and protective of her son and said she wished for more time with Thor, everything she's doing is for the betterment of the future world for Thor and if she survives the storm that's coming, she will tell Thor everything. [11]

Like this? Let us know!
Retrieved from "https://marvel.fandom.com/wiki/Firehair_(Earth-616)?oldid=6465705"
Community content is available under CC-BY-SA unless otherwise noted.