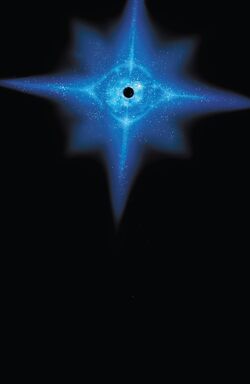 Gallery
Official Name
Unknown
Aliases
Before All Recorded Time,[1] Before There Was Anything,[2] The Birth of the Universe,[3] The Dawn of Everything That Is or Was,[4] The Original Universe,[5] The Prime Universe[6]
Status
Existing
Creators and Appearances
Creators
Jim Starlin, Ron Lim, David Lapham, Marjorie Liu, Greg Pak
First Appearance
Thanos Quest #2
(October, 1990)
(Vision)
Astonishing X-Men (Vol. 3) #61
(April, 2013)
(Full)

Embodied by the First Firmament, the First Cosmos was the very first universe to ever exist. During the Celestial War, the Celestials detonated their unimaginable weapons against the Aspirants, shattering the First Firmament into pieces. The hundreds of new universes born from those pieces coalesced into the first Multiverse and its personification.[4]

Like this? Let us know!
Retrieved from "https://marvel.fandom.com/wiki/First_Cosmos?oldid=6372291"
Community content is available under CC-BY-SA unless otherwise noted.