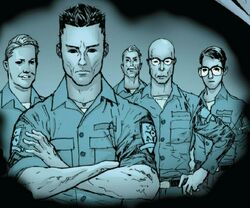 The First Eternity Battalion was an experimental unit created by the US Army which focused on black ops and psychic warfare.[1] Their leader, Emmett Proudhawk, was the closest they had to an actual psychic, as the rest merely had vestiges of superpowers.[2]

Tragedy struck the team during a routine deployment in Transia.[3] At Wundagore Mountain, the First Eternity Battalion walked into a fight between the New Men and Chthon's forces. The team was slaughtered. Members James Tensen and Philip Vogt became the only two survivors, with Proudhawk transforming into the Psi-Force, but being belived dead.[2] Following this event, the Battalion was disbanded.[3]

Retrieved from "https://marvel.fandom.com/wiki/First_Eternity_Battalion_(Earth-616)?oldid=5546869"
Community content is available under CC-BY-SA unless otherwise noted.