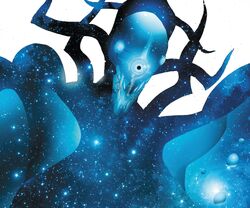 Gallery
Real Name
Inapplicable
Current Alias
First Firmament
Aliases
Alpha,[1] The Cosmic Jailer,[2] The Jailer,[3] The Lonely One,[4] Oldest One,[4] The One,[5] The One Who Is One[6]
Relatives

Nothing can help you now. Your own systems have been corrupted. Turned against you. They will devour you from the inside out. And I will absorb what scraps are left of you, Eternity. And all will be as it was, long ago. Before your foul kind. Before the Multiverses. Eighth and seventh... and sixth... and fifth... and back and back... dying and being born, over and over. Like filthy little organisms. We will return to a saner time. When there was but one cosmos. One universe. One reality. One totality. When there was only I. I am the First Firmament. And soon... I will be the last.

In the beginning, there was only one universe: the First Firmament. Loneliness led it into making life, resulting in the birth of several celestial beings. The dark ones, who the Firmament named "Aspirants," were industrious in their worship of it , seeking its approval whenever they created life on their own. But the multicolored ones, who later became known as "Celestials," wanted their creations to evolve and for the universe to evolve with them, and thus know growth, change, and mortality. This divergence of ideas ushered in a Celestial War that ended with the First Firmament being shattered into pieces by the weapons of the multicolored rebels, forcing it to flee in terror to the farthest edges of being with the remaining Aspirants. Hundreds of new universes were born from the First Firmament's pure substance, forming a new, collective being who was the Second Cosmos and first Multiverse.

The First Firmament watched from the void as the Celestials colonized the Second Cosmos, evolving their own servitors and calling them "Omegas" in opposition to the Alpha their creator was. As time passed by, the Multiverse died time and time again only to be reborn evolved soon afterwards, filling the Firmament with hatred as it wanted to reclaim its position as the embodiment of everything. This feeling gave it patience to choose the right moment to attack, which came following the restoration of the Multiverse as the Eighth Cosmos. Taking advantage of the weakened state in which Eternity (the current personification of the Multiverse) was left in the wake of his death and resurrection, the First Firmament bound him in chains[1] and started to feed on him.[7][5]

Meanwhile, the Aspirants entered Eternity to damage him whenever and however they could. After two of the cosmic aspects -- Lord Chaos and Master Order -- were corrupted by the Aspirants,[1] the First Firmament influenced them[8] into murdering the Living Tribunal, the personification of multiversal law,[9] and merging together to replace him as Logos.[10] Logos then went on to execute the Celestials and force Galactus to change from Lifebringer back to Devourer of Worlds;[11] however, that change was reversed by the Anti-Man, herald of Galactus, at the cost of his own life.[1]

In order to stop the First Firmament and aid Eternity, Galactus gathered Ego-Prime, Psi-Hawk, the Infinaut, and the ghost of the Shaper of Worlds to form the Eternity Watch.[12] The Eternity Watch confronted Logos and the Aspirants in the Superflow. At the same time, the Maker foolishly used the High Evolutionary's technology to bring down the Superflow in an attempt to unify the Multiverse into a single reality and strengthen Eternity. When this process proved to be counterproductive as it made it easier for the First Firmament to consume Eternity, Galactus had Shaper's ghost teleport the Ultimates (a team of superheroes from Earth that Galactus had reformed to help in his quest against the First Firmament) to the High Evolutionary's Counter-Earth.[13]

With the help of the resurrected Ultimates of Earth-1610, Galactus' Ultimates managed to reverse the damage caused to the Superflow and restored the Multiverse to its normal state. Galactus and the Eternity Watch subsequently resumed their confrontation against the agents of the First Firmament. With the help of Black Panther's ascended astral form and the rebirthed Celestials, the Eternity Watch defeated the Aspirants and Logos. The First Firmament was also defeated when Eternity summoned the past incarnations of the Multiverse to his aid, the Ultimate Ultimates. After being chained, the First Firmament was taken by the Ultimate Ultimates to the Next Place, where they hoped to heal their kin.[4]

Much like any of the embodiments of the Multiverse, the First Firmament is virtually omnipresent, omniscient, and omnipotent, only surpassed by the One-Above-All.[citation needed]

The First Firmament is stronger than the Eternity reborn as the eighth iteration of the cosmos;[1] however, it's not strong enough to oppose its united successors.[4]

Like this? Let us know!
Retrieved from "https://marvel.fandom.com/wiki/First_Firmament_(First_Cosmos)?oldid=6190663"
Community content is available under CC-BY-SA unless otherwise noted.