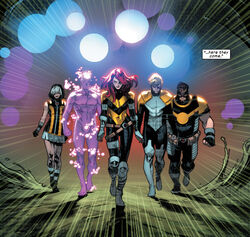 Base of Operations
Krakoa
Affiliations

Following the foundation of the mutant state of Krakoa, Charles Xavier established a group of mutants known as “the Five” (Tempus, Proteus, Hope Summers, Elixir, and Goldballs/Egg) with the goal to resurrect all the fallen mutants in a process that Magneto called “transcendent” in which the five mutants, together, were able to create life by generating biological husks.

During this process of mutant resurrection, Goldballs produces a number of unviable biological "eggs," equal to the number of mutants The Five has to resurrect. The eggs are then injected with mutant DNA from Mister Sinister’s genetic catalog, and then made viable thanks to Proteus’ reality-altering powers, transforming the unviable eggs into viable ones. Elixir biologically gives the eggs life starting a new cellular replication process and husk growth, and then Eva Bell uses her time manipulation powers to maturate the husks to the age the mutants were when they died. Hope Summers uses her mimic powers to empower everyone else’s abilities in the process. Hope's powers allowed The Five to operate at both their peak and in unison. With this process, The Five were effectively able to make new clones of the deceased mutants, restoring their bodies, their powers, and their minds as they were at the time of their deaths.

The more The Five practiced their resurrections, the easier the process became. Also, these five mutants appeared to have become an inseparable family unit and were almost never seen apart from one another. Their connection appeared to have extended beyond the union of their powers, reaching the mutants themselves. On Krakoa, The Five were considered as something sacred to be treasured.

Because the powers of Proteus were directly associated with the destruction of its own body, The Five had a backup mutant husk prepared for Proteus to inhabit when he burned out his old one. Depending on the frequency with which he was using his powers, a Proteus body normally lasted one week or even a single day, during periods of excessive power use.

The Five had previously resurrected other long deceased mutants, such as Banshee, as well as Sophie and Esme Cuckoo.[2]

The Five were seen partying following the recognition of Krakoa as a sovereign nation by the United Nations and the first meeting of the Quiet Council.[3][4]

Retrieved from "https://marvel.fandom.com/wiki/Five_(Earth-616)?oldid=5176761"
Community content is available under CC-BY-SA unless otherwise noted.