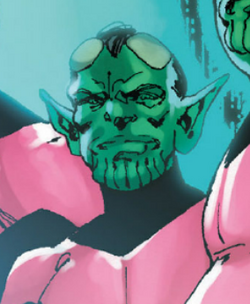 Fiz was a young Skrull Mutant that was rejected by the Skrull Empire and alongside other Mutant Skrulls, found his way to Charles Xavier on Earth. After a brief stay on Earth with Xavier, they went to space to train alongside Xavier. While traveling next to orbit, they found Bishop prior to the Maximum Security event. Soon after, Fiz helped the X-Men battle Apocalypse. After that, he went back into Space with his Skrull Mutant friends.

In a file compiled by Chancellor Kal'du for Veranke,[1] the Cadre K was still rejected by the Skrull Empire. According to their information, including the massive depowering of earth's mutants, they seem to be still powered, not affected by the "No More Mutants" spell.

Like this? Let us know!
Retrieved from "https://marvel.fandom.com/wiki/Fiz_(Earth-616)?oldid=5638773"
Community content is available under CC-BY-SA unless otherwise noted.