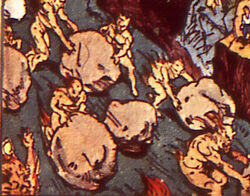 The origin of the Flame Men is unknown; however, according to their leader the Sub-Earth Man, they ruled the Earth billions of years ago, before the planet's surface cooled. In 1941, the Flame Men attempted to retake the surface world. However, their efforts were thwarted by geologist Bob Roland. Bob believed his thwarting of their plot was only temporary.[1]. This remains to be substantiated.

The Flame Men have an aversion to cooler temperatures. It is possible that cold enough temperatures could even kill them.

Primitive for the most part, although they have access to asbestos and have fashioned asbestos lined gloves and boots so that they can handle materials and humans without damaging them.

The Flame Men should not be confused with the Lava Men who are a similar subterranean species. Any connection between the two is highly speculative.

In the Mystery Tales #23 story, "The Burning Truth",[[1]] there is a race of Fire-People living inside a volcano (if they look like the Flame Men then they could be connected).

Like this? Let us know!
Retrieved from "https://marvel.fandom.com/wiki/Flame_Men?oldid=4809213"
Community content is available under CC-BY-SA unless otherwise noted.