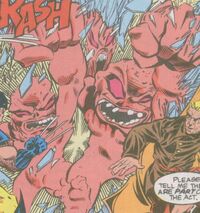 3 Scientists who experimented on themselves, they gained the ability to control all of their molecules to change shape and resist attack[1].

While fleeing they were pursued by FBI agent Patty Kurlyshek, who allied with the New Mutant Warlock in the hope of recapturing them. They were defeated when Warlock threw them into a tar pit and blew hard enough for the tar to dry and lock them.

Retrieved from "https://marvel.fandom.com/wiki/Fleshtones_(Earth-616)?oldid=5263175"
Community content is available under CC-BY-SA unless otherwise noted.