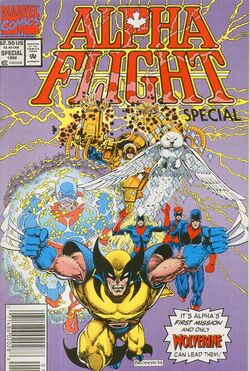 When James Hudson decided to create a super-human response team, he drafted several super-humans into a team he called the Flight. The Flight's first (and only documented) mission pitted them against Egghead (Elihas Starr) and several of his hired super-human henchmen (Solarr, Porcupine, Rhino, Swordsman (Jacques Duquesne), Power Man (Erik Josten)).

Egghead was planning on launching a nuclear missile into New York City from a location within Ontario. The Flight was able to stop him, despite the fact that Logan could barely control himself and that Smart Alec snapped under the pressure. In order to save the Flight, Saint Elmo had to sacrifice his life to absorb the explosion.

Due to the failure of his first efforts, Hudson revised his plans and created a tiered system for the Flight:

Like this? Let us know!
Retrieved from "https://marvel.fandom.com/wiki/Flight_(Earth-616)?oldid=5574437"
Community content is available under CC-BY-SA unless otherwise noted.