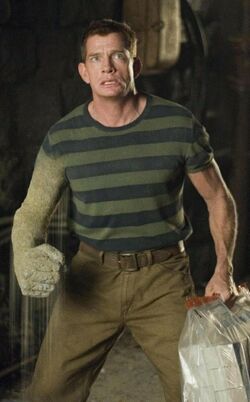 Flint Marko stole to pay for medical treatment for his daughter, Penny, who has an unspecified illness. While on the run from the police after escaping from prison, he accidentally fell into an experimental particle accelerator that molecularly bonded him with sand, giving him shapeshifting sand abilities. Sandman is later spotted by police officers walking down the streets of Manhattan. Sandman got on top of a dump truck filled with huge amounts of sand. When one of the policemen climbs atop of the truck, he is assaulted by a huge fist made out of sand. Having absorbed the truck's sand to add to his mass, a giant Sandman then emerged. The police shot at Marko, but he managed to escape by turning into a sandstorm and flying away with the wind. At the Spider-Man fair, the sandstorm was spotted and Spider-Man was asked to investigate. In doing so, Spider-Man confronts Sandman, foiling his attempt to rob an armored truck, but Sandman got away.

Later, at the police station, Police Captain George Stacy revealed that there is evidence implicating Marko as Ben Parker's killer and he also told Peter and Aunt May that the carjacker, Dennis Carradine, that Peter confronted five years earlier, was really Marko's accomplice, as well as did not fire the shot that actually killed Ben Parker. Peter is left feeling guilty over causing the death of the suposedly-innocent carjacker, as well as letting the real killer get away. In the meantime, Sandman robbed a bank and Spider-Man, now with enhanced abilities due to his new black symbiote suit, chased him to the subways. During their fight, Spider-Man managed to burst a water tank, flooding Sandman in water and turning him into mud, which was swept through a water grate. Believing that Sandman was dead, Spider-Man left in satisfaction, but unbeknownst to him, Sandman, who was washed out of the river, was able to eventually reconstitute himself.

Later, Spider-Man tore the Symbiote of his body in a bell tower after learning of its parasitic nature and it bonded with Edward "Eddie" Brock Jr. to become Venom, who convinced Sandman to team up with him to destroy Spider-Man. The two kidnapped Mary Jane Watson and took her to a construction site, forcing Spider-Man to face them both. During the fight, Sandman used the site's sand to increase his size, turning into a version of himself several stories high. After Venom restrained Spider-Man with his webbing, almost strangling him, Sandman nearly beats Spider-Man to death, but for the intervention of Harry Osborn, under the guise of the New Goblin, who came to his friends aid with his goblin arsenal. Harry exploded a pumpkin bomb at Sandman, as well as then distracted Venom enough to free Spider-Man. Working together, the two manage to save Mary Jane and defeat Sandman and Venom, though at the cost of Harry's and possibly Eddie's lives. Sandman returned to his normal size, as well as having discovered Spider-Man's real identity, he revealed that his shooting of Uncle Ben was an accident while he was trying to carjack Uncle Ben. During the incident, Ben attempted to reason with Marko, but Carradine arrived and startled Flint, causing him to shoot Ben accidentally. Sensing that Marko was telling the truth, as well as understanding the importance of forgiveness over revenge, Spider-Man forgave him and Marko shapeshifted and flew away.[1]

Like this? Let us know!
Retrieved from "https://marvel.fandom.com/wiki/Flint_Marko_(Earth-96283)?oldid=6059846"
Community content is available under CC-BY-SA unless otherwise noted.