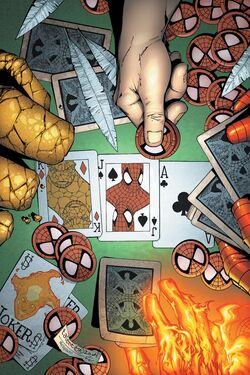 The first recorded poker game was held at Avengers Mansion and involved the Thing, Ms. Marvel, Wonder Man, the Beast of the Avengers, SHIELD director Nick Fury as well as Avengers butler Edwin Jarvis and District Attorney Blake Tower. The game was interrupted when Fury was called to stop militant Jacob Pollock, who was attempting to steal Yellow Claw's Sky Dragon from SHIELD custody. The four heroes broke the poker game in order to help Fury stop Pollock and secure the Sky Dragon.[1] The next poker game involved the Thing, Fury, Captain America, Iron Man and Giant-Man.[2] This game was one of the few that was not interrupted by a super-villain or other menace.

The next game was held at the Fantastic Four's Baxter Building headquarters and involved the Thing, the Beast, Captain America, Hawkeye, Iron Man and the Wasp as well as Jarvis. That game was broken up when the heroes had to quell an conflict between Annihilus and Blastaar in the Negative Zone.[3] The next game was at Avengers Mansion which included the Thing, Beast, Wonder Man, Binary (formerly Ms. Marvel), as well as newcomers Wolverine, Monica Rambeau the recent successor to the title of Captain Marvel as well as Jarvis and Blake Tower. This match ended on a down note when Binary learned that the original Captain Marvel, the Kree hero Mar-Vell had recently died while she was off on a mission in space.[4] The next recorded game took place at the Four Freedoms Plaza and included the Thing, Mister Fantastic, Captain America and Nick Fury. Fury was called away from this game to deal with the threat of the Mandarin.[5] The next game was also held at the Four Freedoms Plaza and included the Thing, Nick Fury, Wolverine, the Beast and Gambit. This time Wolverine had to leave to bail his sidekick Jubilee who ended up stuck in Japan.[6] The following game, also at the Four Freedoms, included the Thing, Human Torch, Fury, and Doctor Strange. While not interrupted by a crisis, the trio discovered that they had all had encounters with the demon known as KhLΘG around the same time in the recent past.[7]

The next game was held at Angel's Soho loft, which included his fellow X-Men, Iceman, Beast, Storm, Gambit, and Cannonball as well as The Thing. This game also went off without any interruptions.[8] A poker game was played during the anniversary of the Avengers formation at Avengers Mansion. This included Beast, Hawkeye, Giant-Man, the Scarlet Witch, Quicksilver, and his wife Crystal. This game was interrupted by an attack by warriors who claimed to be sent by the time traveling warlord Kang.[9][note 1] The next game took place at the Fantastic Four's Pier Four headquarters and it included the Thing, the Human Torch, Wolverine and Cannonball. This game was interrupted by an attack on the Pier by the Fantastic Four foe known as the Psycho-Man.[10] The following game was held at Nick Fury's apartment and included Wolverine, Captain America, She-Hulk and The Thing. During this game, Wolverine went on a beer run and was attacked by Hand assassins. When he finally returned to Fury's apartment he found the game was over and everyone had fallen asleep.[11]

The next poker game was a public exhibition with the proceeds going to charity. This game included the Fantastic Four, Spider-Man, the Angel, Doctor Strange, and the Black Cat. It was a game that has the rare distinction of being crashed by a super-villain when the Kingpin showed up at the game. Although the crime boss had the upper hand, Spider-Man eventually cleaned him out in a one-on-one game.[12] When the Thing came into a windfall of money, his ridiculous bets shied heroes away from the game for a short period of time, including long time players Warbird (formerly Ms. Marvel and Binary) and Wonder Man.[13] Not long after this, the Thing held a massive poker game after celebrating his bar mitzvah. Those in attendance included his fellow teammates in the Fantastic Four; members of the New Avengers which included Captain America, Iron Man, Wolverine, Spider-Man, Spider-Woman,[note 2] Luke Cage; Avengers alumni including Goliath, Falcon, Hercules, Yellowjacket,[note 3] the Wasp, Tigra, Sub-Mariner, Stingray, She-Hulk, Wasp, Wonder Man; X-Men alumni Cyclops, Colossus, Marvel Girl, the Beast; as well as Doctor Strange, Iron Fist, Sasquatch, Nighthawk; also in attendance was sometime Fantastic Four ally and general nuisance the Impossible Man, as well as members of the Great Lakes Avengers.[14] It was the last time the heroes got together to celebrate before the forthcoming super-hero Civil War, a fact that Iron Man reflected upon with some sorrow.[15]

Following the death of Captain America during the Civil War,[16] the Thing organized a secret game with members of Captain America's former Secret Avengers which included Luke Cage, Iron Fist, Spider-Woman, and Spider-Man. The game was briefly interrupted when Wolverine showed up and engaged in a fight with Spider-Man over Captain America's death, but it was quickly broken up and the game resumed.[17] Not long after this another, less secretive, game was held which included the Thing, Wolverine, Spider-Man, and She-Hulk.[18] Later another game was played between the Thing, Nick Fury, the new Captain America, the Human Torch, Hawkeye, Luke Cage, Spider-Man and Wolverine. This game took place at Iron Fist's dojo.[19] Most recently, the Thing and the X-Men's Gambit played poker against members of the Yancy Street Gang.[20]