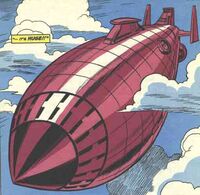 When Doom endowed the alien Tyros the Terrible with the Power Cosmic and sent him to destroy the Fantastic Four in New York City, he monitored the fight from his cloud-covered Fortress. While Tyros confronted the Human Torch and the Thing, Doom used the ship to capture the Invisible Girl, who was returning to New York in a section of the Fantasti-Car MK II. Doom sent a doppleganger robot to salute the Invisible Girl but, when she was defiant, the robot slapped her, revealing its nature as it was far cruder than Doom. The Girl destroyed the robot, then Doom used a communication sphere to confer with the Girl. Doom mocked her, showing the fight and prompting her to choose between helping her friends or confronting Doom - she of course left.[1] Albeit Tyros held his terrain, Doom saw from his vantage point in the ship that his main nemesis Mr. Fantastic had not arrived. Doom disembarked the Fortress to join the fray and delay Tyros's victory until Fantastic could come. This encounter did not end as he expected, because both Doom and Tyros were apparently destroyed.[2]

The Flying Fortress was an immense airship with dozens of compartments (Labs, armories, generators, food stores, etc.)[3] controlled from a central room. The ship was equipped with some minor robot servants, escape pods...etc.

Grappler Ray that can be used to take people to the ship.[4][3]

Electrical Disruptor Device
The Flying Fortress was equipped with a device capable of simultaneously disrupting the function of every electrical device in the country.

Cloud Generator
A system of generation of clouds to hide it from detection in populated areas.[4][3]

Grappler Ray
The exterior of the Flying Fortress could generate a grappler ray capable of snagging targets from the surface or pulling an enemy's craft towards it.

Disintegrator Cannons
The exterior of the Flying Fortress was armed with disintegrator guns which could be programmed to recognize and fire upon specific targets based on their atomic structure (such as the Fantastic Four).[4][3]

Power Spheres
These devices, once released, are drawn to body heat. They swarm their targets until they surround them, then transport them to an undisclosed dimension.

Maze of Bars
This defensive system fills the entire room with a maze of moving metal bars.

Turbine Trap
A specially prepared room within the Flying Fortress, contained a powerful turbine that could create a vortex in the room, spinning its inhabitants out of control.

Cement Trap
A specially prepared room within the Flying Fortress could be sealed and filled with a quick-hardening cement.

Collapsible Floor Trap
A specially prepared room within the Flying Fortress had a retractable floor that could be opened, causing the occupants to drop out of the vehicle into the open air.

Retrieved from "https://marvel.fandom.com/wiki/Flying_Fortress_(Doctor_Doom)?oldid=4828213"
Community content is available under CC-BY-SA unless otherwise noted.