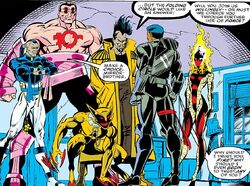 Team Aliases
Children of the Pact

In 1966 during the Vietnam War, an American recon patrol in Cambodia stumbled upon the ancient, hidden temple of a cult known as the Dragon's Breadth, which had remained hidden for centuries. It had been built upon a well-spring of raw, primal energy called the "Well of All Things". The inhabitants decided to breed a superior race that would one day unite with the ways of the west. They believed that this union would produce children capable of harnessing the power of the Well. The members of the recon patrol were to be the fathers of these children. Most of the patrol agrees to this plan.Diego Casseas, one of the other members of the recon patrol now calling himself the Left Hand, stole the power of the Well from his own child.

Left Hand then gathered the other children of the pact including Midnight's Fire into a group called the Folding Circle;Left Hand, Night Thrasher, Midnight's Fire, Silk Fever, Bloodstrike.

The New Warriors and the Circle join up at the Cambodian temple where it all started. The Circle attempts to take control of the Well away from Tai, who intends to sacrifice everyone but herself in order to gain power. Both teams suffer losses as Tai knocks out several of the more durable members. Tai is seemingly slain by an Uzi to the chest wielded by New Warriors leader Night Thrasher. Casseas also apparently dies. The surviving members of the Circle escaped in an Avengers Quinjet, an aircraft originally stolen by the New Warriors.The remaining members of the Folding Circle later crash in Madripoor and attempted to usurp the role of Aardwolf a mutant crime lord. They succeed, but were later taken down by Night Thrasher and Silhouette.

Retrieved from "https://marvel.fandom.com/wiki/Folding_Circle_(Earth-616)?oldid=5550761"
Community content is available under CC-BY-SA unless otherwise noted.