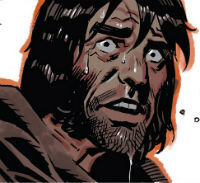 Folkbern Logan... you are finest there is at what you choose to do. But what you do be not very kind.

Folkbern Logan, the ancestor to Wolverine that lived in London, England during the 11th Century. In 1013 AD. Folkbern was allegedly the last Pagan in the city, and poked fun at his friend because he wasn't getting any from his fiancee, due to them being Catholic. The two bickered but were attacked by the Horsemen of Apocalypse. Folkbern was saved by Thor, who killed the Horsemen using his axe Jarnbjorn.[1]

It is implied he passed away several years later.

Like this? Let us know!
Retrieved from "https://marvel.fandom.com/wiki/Folkbern_Logan_(Earth-616)?oldid=5505165"
Community content is available under CC-BY-SA unless otherwise noted.