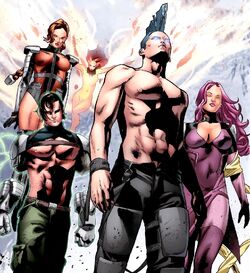 The Force Warriors learned this technique from observing the Invisible Woman's last action, creating a powerful force wall to prevent Fortress X from being blown up by the bomb carried by the Hulk.

On Moira's counsel, they briefly took control of Fortress X, believing Magneto had betrayed them. They faced down Moonstar's Cadre, Kitty Pryde and Magneto.

The Force Warriors were made to stand down however, by the appearance of Charles Xavier who explained that their world was nothing but a poorly constructed sham made by Moira, a rogue personality of Legion's. When Moira attempted to punish them by creating a massive human army to attack the Fortress, the Force Warriors helped defend it, as Legion re-absorbed Moira and restored the world to its original state.

Like this? Let us know!
Retrieved from "https://marvel.fandom.com/wiki/Force_Warriors_(Earth-11326)?oldid=6077921"
Community content is available under CC-BY-SA unless otherwise noted.