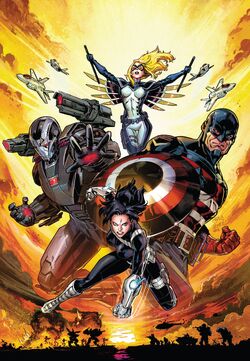 After the Avengers West Coast was disbanded, many of the former members did not want to return to the main Avengers fold. Iron Man revealed his new plan for a proactive team based in a highly sophisticated, adaptable building known as The Works. A special 'hex mainframe' computer worked with the Scarlet Witch's power to predict events that the team could act on. Through her powers and the computer's calculations, they could proactively determine where the team was most needed rather than react to an alarm or breaking news. The original roster consisted of most of the final lineup of the Avengers West Coast, namely: Scarlet Witch, Iron Man, Wonder Man, Spider-Woman, and U.S. Agent.[1]

The team started off on a bad note, losing Wonder Man on its first mission, a space battle against the Kree. This deeply traumatized the Scarlet Witch, with whom Wonder Man had been involved. It would be some time before she recovered. The alien warrior Century soon joined them.[2]

While investigating instances of monsters and people apparently trapped in their sleep, the team was assisted by Dreamguard.[3]

The team responded to a centuries-old battle between rival ethnic groups lead by their champions Volkvhy and Ember in Slorenia. The cyborg mercenary Black Brigade was also involved, battling Iron Man. The team was successful, ending generations of one side enslaving the other.[4]

The Rigellian Recorder was revealed to be corrupted, and was soon defeated by Century. Tension in the ranks began as Scarlet Witch, the nominal leader, was countermanded more and more by Iron Man.[5]

Iron Man began acting strangely due to the influence of Immortus.The ruthless Cybermancer became a member, and the team was ordered to capture Hawkeye, their former leader as West Coast Avengers chairman, who had been framed for the murders at Avengers Mansion. Public Relations director Amanda Chaney was murdered.

The mysterious Moonraker was confronted about his sudden appearance on the team. He claimed he was actually Libra shortly before being abducted.

Iron Man and War Machine battled and destroyed most of The Works. It was revealed that there were chronograph weapons in a hidden sub-basement programmed to bombard the planet. Scarlet Witch, U.S. Agent and War Machine managed to disable them despite the building going into Defense Code Mordred, and sending hard light holograms to attack them.[6] Soon after this the team were confronted by an alternate reality version of Wonder Man. Facing trauma from this encounter as well as the continuing leadership struggle, the team quietly disbanded.[7]

Many years later, Force Works was reinstated during the robot revolution as a taskforce designed to subdue rebel artificial intelligences. The team was operated by Maria Hill, with War Machine serving as field leader. His teammates included Gauntlet, Mockingbird, Quake, U.S. Agent and Solo, but the former left the team after a mission resulted in Gauntlet's hospitalization.

When the team was deployed in Lingares to investigate a mysterious nuclear explosion,[8] Force Works crossed paths with an army of Deathloks as well as the giant robot Ultimo.[9] They were assisted by M.O.D.O.K. in killing Ultimo, unbeknownst that he had created the Deathloks in the first place to stop Ultimo. M.O.D.O.K. usurped Ultimo's beheaded body, and rechristened himself UltiM.O.D.O.K., but he was ultimately defeated as well. Despite the success in stopping the Deathloks and Ultimo, Maria Hill fired all the team save for U.S.Agent for both their course of action and their refusal to retrieve M.O.D.O.K.'s files on how to create Deathloks. However, U.S.Agent was only spared because he handed Maria Hill over a blank thumb drive, claiming it contained the files in order to stall Hill until a scrub team sent to Lingares destroyed all traces of the Deathlok operation, including the files.[10]

Retrieved from "https://marvel.fandom.com/wiki/Force_Works_(Earth-616)?oldid=5579026"
Community content is available under CC-BY-SA unless otherwise noted.