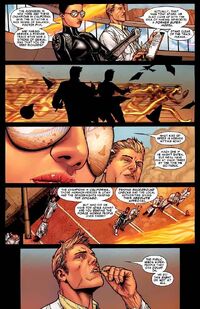 Base of Operations
Iowa
Affiliations

Formed as the as the Iowa division of the 50-State Initiative after the superhero Civil War. Named after the Force Works team led by the Scarlet Witch and Iron Man that acted as the short-lived successor team to the Avengers West Coast. It is as-yet unknown who will make up this team.

In the Iron Man, Director of SHIELD Secret Invasion tie-in we find out Cybermacer (Suzanne "Suzie" Endo) is a member of the new force works.

Retrieved from "https://marvel.fandom.com/wiki/Force_Works_(Initiative)_(Earth-616)?oldid=748647"
Community content is available under CC-BY-SA unless otherwise noted.