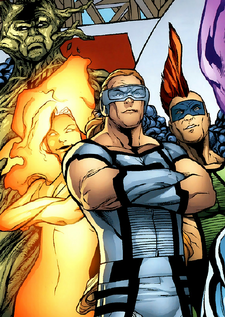 Force of Nature were the super human operatives employed by the Project Earth organization. The team is sent to stop some land developers from destroying a large area of the Amazon Rainforest.

The team consisted of Aqueduct|Aqueduct, Firewall, Skybreaker, and Terraformer. They first came into contact with the New Warriors when members of Project Earth faked their disappearance as a publicity stunt.

Maddie Baldwin, Speedball's mother, was a member of Project Earth and when she went missing Speedball convinced the New Warriors to investigate. The team headed to the Amazon Rainforest to help Speedball find her. They were attacked and captured by the Force of Nature team.

Speedball offered to help the Force of Nature team until it became clear that they wished to do harm to the land developers. The Force was defeated and Project Earth abandoned them after an attempt to martyr Maddie Baldwin and blame the developers, but Speedball and the Warriors stopped them.

Project Earth helped the Force of Nature team leave prison and return to their jobs but Firewall left to join the Folding Circle.

The next fire element recruit was Firebrand. Force of Nature was sent to deal with oil fires in the war torn nation of Trans-Sabal, joining the ongoing conflict.

Project Earth recruited the New Warriors to pull the team out before their actions further damage their reputation. The Warriors entered the country but get wrapped in the conflict as well and the Force of Nature team was arrested and detained in the Vault.

Aqueduct, Skybreaker, and Terraformer were involved in a protest riot in the Vault over poor conditions. The authorities had no way to meet (or even negotiate) their demands due to the high level security to detain the superhuman inmates. Marvel Boy, who was in jail for a short sentence for killing his father, helped stop the riot by getting Terraformer to calm down and letting communicate through the plants in the warden's office. The warden agreed to grant privileges to certain inmates on a case by case basis, according to each prisoner, quelling the riot.

The Force of Nature returned to the criminal ways. Aqueduct joined the seventh incarnation of the Masters of Evil and later was recruited for government service by the Thunderbolts, to be part of the 50-State Initiative.[2]

Retrieved from "https://marvel.fandom.com/wiki/Force_of_Nature_(Earth-616)?oldid=5546914"
Community content is available under CC-BY-SA unless otherwise noted.