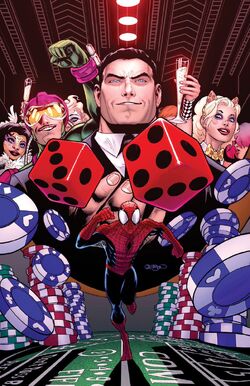 Little is known about the past of the assassin and mercenary who calls himself the Foreigner. It is established, however, that he was formerly married to the international mercenary Silver Sable. After their divorce, the two continued a semi-serious game of trying to assassinate each other using various means.[5]

Foreigner first clashed with the hero Spider-Man when he made a wager with his fellow mercenary Chance that Chance couldn't defeat Spider-Man. Foreigner won the bet.[6]

Later, Foreigner became romantically involved with Spider-Man's ex-lover Black Cat, when he was hired to retrieve a gold notebook from her that she had stolen from the office of the crimelord Kingpin. Foreigner claimed he wanted to form an alliance with her to take down Spider-Man, but in reality he wanted to recruit Spider-Man for his organization of assassins, the 1400 Club. He was not successful in this goal, and parted company with the Black Cat.[7]

In response to Countess Karkov's escalating tensions with Latveria, Silver Sable contacted Foreigner for aid in a mission to acquire the Infinity Formula from the Chameleon. Their deal was interrupted by Spider-Man, who allowed them the formula upon learning of Sable's condition.[8] After Sable recovered some measure, Foreigner visited Chance's Casino on a mission, and conned Chance into a bet to steal one of Spider-Man's web-shooters. To ensure Chance won, he sent the Jack O'Lanterns to aid him, and returned with a web-shooter; however, Chance realized Foreigner's true aim but could not admit to it without loosing his casino.[9]

He assassinated General Ross and was subsequently defeated by Peggy Carter.[10]

Foreigner has the ability to induce a 10-second hypnotic trance in someone by making eye contact with them. By using this ability he can make an opponent believe he can move at super-fast speeds, or by running from the scene while they are entranced, he can fool them into thinking he can teleport himself away.

Foreigner is adept in multiple martial arts, making a formidable hand-to-hand combatant. He is also highly skilled in the use of firearms and explosives.

Foreigner is also a master of disguise, having posed as various individuals, and is skilled at undercover work and intelligence gathering. He has even disguised himself as Ronald Reagan [4]

Foreigner has trained his body to be at the peak human strength of a man of his age, height and build.

Like this? Let us know!
Retrieved from "https://marvel.fandom.com/wiki/Foreigner_(Earth-616)?oldid=6131567"
Community content is available under CC-BY-SA unless otherwise noted.