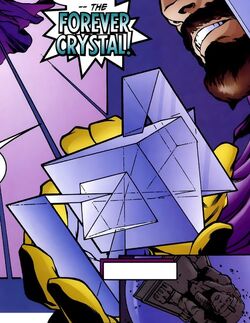 During the Destiny War, Immortus would invade Chronopolis, home to his past counterpart Kang, in part of his plot to alter the destiny of the human race and prevent them from traveling beyond their solar system. He would storm Chronopolis, fighting off Kang's armies and a team of time displaced Avengers. Accessing the Heart of Forever within the citadel, Immortus would use it's awesome power to condense all of Chronopolis into the Forever Crystal, an object of immense chronal power[1].

Immortus would use it to create three temporal anomalies in three different time periods and alternate universes where the threat of humanities universal colonization and invasion seemed most likely. He would travel to Earth-9904 where a Skrull posing as Richard Nixon plotted to destroy America's space program, an event that would boost human space travel beyond the stars in the future, Immortus would use the Forever Crystal to erase that reality from existence[2]. Immortus would then go about manipulating various alternate realities and time lines manipulating events to prevent humanities threat to the universe. Noting that the Scarlet Witch was a Nexus being that would pose a threat, he would use the Forever Crystal to split the original Human Torch into two entities. One of these entities would continue on as the Human Torch while the other would be taken by Ultron and rebuilt into the Vision in a plot to prevent the Scarlet Witch from having children[3].

Ultimately, Immortus would be forced by his masters the Time Keepers to use the Forever Crystal in their Chronal Cannon that would wipe the human race from all existence. When the time displaced Avengers attempted to stop them, the Time Keepers would order Immortus to kill them. Not wishing to murder the very heroes he's worked so hard to manipulate, Immortus would be killed by the Time Keepers and they would take the crystal. When the Avengers would continue to oppose them, the Time Keepers would summon an army of evil Avengers from alternate realities to keep their enemies at bay[4]. In the final battle, Captain America would recapture the Forever Crystal, and despite the temptation to use it to change many of his personal tragedies he would destroy it, ending it's threat to the human race [5]

The Crystal however would re-manifest on Earth-616 before the Supreme Intelligence. The Intelligence would use the Crystal to jump start the evolution of the Kree race[6].

Like this? Let us know!
Retrieved from "https://marvel.fandom.com/wiki/Forever_Crystal?oldid=6430064"
Community content is available under CC-BY-SA unless otherwise noted.