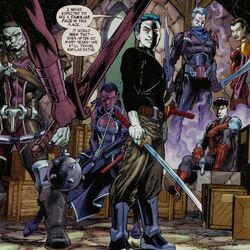 A group of Vampires gathered by Japanese vampire Raizo Kodo, the group accompanied Kodo when he offered his assistance to Dracula when the vampire lord's Romanian castle came under attack by a Nul-possessed Hulk.

Seen as threats and imprisoned, the Forgiven broke loose with little effort, hoping to provide the aid they had offered.[1] Assaulting the arriving Hulk, the Forgiven found themselves beaten, one after the other, with little effort from the Hulk, though they managed to evacuate the nearby town of Pasnic.[2] Continuing to hold back the Hulk, the team attempted to stop him by ramming two trains into him at the same time, to little effect.

After Dracula's forces tried, and failed, to stop the Hulk, the timely arrival of Raizo and, seemingly, Red She-Hulk (Betty Ross) proved enough to finally force the Nul persona from Hulk, restoring him to his old self, and ending his rampage.

An angry Hulk stormed off shortly after the revelation that "Betty" was actually Forgiven member Inka, using a Claw sect technique that allowed her to mask her appearance.[3]

Collecting Nul's hammer, the group hid in a cabin in Transylvania until the arrival of Valkyrie. After a brief duel over the hammer, Raizo agreed to hand it over.[4]

The Forgiven later greeted Jubilee following her crash landing while trying to disable a Sentinel[5] and sought to help her overcome her need for human blood, as they had been helped themselves by Raizo.[6]

When confronted by the X-Men, the two teams briefly battled before Jubilee separated them, just in time for Colossus to arrive with the Zapata Brothers, the first of many assassins arriving to kill Raizo.[7]

Retrieved from "https://marvel.fandom.com/wiki/Forgiven_(Earth-616)?oldid=5546923"
Community content is available under CC-BY-SA unless otherwise noted.