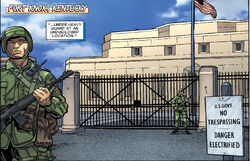 Fort Knox is a United States Army post in Kentucky, located south of Louisville and north of Elizabethtown. It currently holds the U.S. Army Armor Center, the U.S. Army Armor School, and is used by both the Army and the Marine Corps to train crews on the M1 Abrams main battle tank.

It has frequently been targeted by criminals who have sought to obtain the gold contained within. Unbeknownst to most people, someone at one point replaced most of the gold with gold-plated tungsten bars.[1]

In 1940 Fort Knox was attacked by a Zeppelin invented by Professor Monte, who attempted to steal the gold within the Fort. This attempt was thwarted by the Dynamic Man.[2]

Years ago, The Black Widow attempted to raid the gold repository and was thwarted by Iron Man.[3]

Shortly before the Civil War, Tony Stark's upgraded Extremis armor was briefly quarantined inside of Fort Knox. The son of late scientist Ho Yinsen was able to hack into Tony's brain, affecting the Extremis protocol to operate the armor via remote control, enabling it to break out of the quarantine.[4]

Like this? Let us know!
Retrieved from "https://marvel.fandom.com/wiki/Fort_Knox?oldid=5862424"
Community content is available under CC-BY-SA unless otherwise noted.