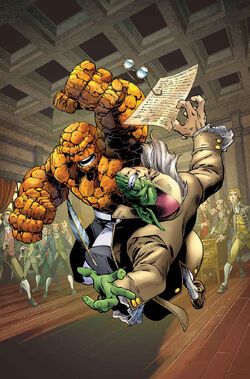 The Founding Fathers of the United States of America led the American Revolutionary War against Great Britain and King George III. Most were descendants of British colonists who settled in the Thirteen Colonies in North America.[1]

On July 2, 1776, the Continental Congress formally voted for independence, and issued its Declaration on July 4. The Founding Fathers together with several other key players of their time, structured the democratic government of the American Republic. Skrull subversives arrived and plant to make alterations to the constitution but was stopped by the time travelling Fantastic Four[2]

Retrieved from "https://marvel.fandom.com/wiki/Founding_Fathers_(Earth-616)?oldid=5304824"
Community content is available under CC-BY-SA unless otherwise noted.