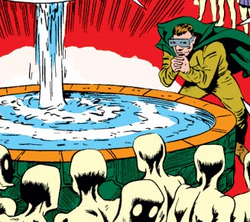 The fountain of youth was a strange body of water contained in a well which can wash away the ravages of time, hidden many leagues below the Earth surface.

Tyrannus used to sip the water from the fountain of youth, which kept him alive for centuries, despite being banished to the center of the Earth by Merlin the Magician[1].

Some time after, the water in this enchanted well was occupied by the Mole Man, who had his Moloids guard it from his arch enemy, the accursed Tyrannus, who needed it to remain young. Tyrannus, holding Betty Ross, Rick Jones and Maj. Glenn Talbot hostages, forced the Hulk to claim the youth fountain, while the Mole Man defended the location with his Octo-Sapien. Hulk eventually managed to defeat the robot by both plunging into the well and making its circuits explode[2].

Like this? Let us know!
Retrieved from "https://marvel.fandom.com/wiki/Fountain_of_Youth?oldid=6435675"
Community content is available under CC-BY-SA unless otherwise noted.