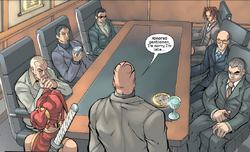 The Four Winds is a global crime syndicate with 20,000 members, an organization that is structured like a corporation with a board.[1] It's original 4 leaders were assassinated by Deadpool. It was active in Kobe (Japan), but expanded or relocated operations to New York City, United States.[2] Higashi inherited the syndicate.

The organization is involved in real estate development in the northeastern U.S., forcibly evicting people.[3] Recently the Taskmaster, Agent X, and Outlaw defeated the syndicate's men and the half-dozen supervillains they hired.[4]

Like this? Let us know!
Retrieved from "https://marvel.fandom.com/wiki/Four_Winds_(Deadpool_Foes)_(Earth-616)?oldid=5565146"
Community content is available under CC-BY-SA unless otherwise noted.