Four from the Fantastik 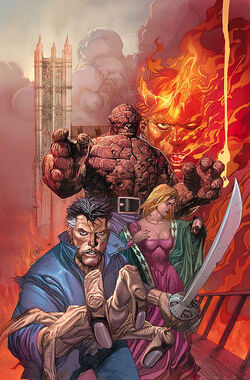 The crew of the ship the Fantastik, includes Captain Benjamin Grimm, Sir Richard Reed, Susan Storm and her brother Jonathan earned their powers when they encountered a wave of energy from the Sargasso Sea. Forever changed, the Four stayed together and continued their westward journey.

After traveling around the world, the team found themselves captured in Latveria. Trapped under the castle of Count Otto von Doom, they remained imprisoned until rescued by Sir Nicholas Fury, Carlos Javier and his Witchbreed, Thor, and Matthew Murdock. They travelled with the heroes to the New World where they found the temporal rip that had formed when Rojhaz (Captain America) was sent back in time, starting the age of marvels more than 300 years early. With the help of Sir Doctor Stephen Stranger, Thor, and Enrique, Reed managed to open the rip and send Rojhaz back through, thus saving the Multiverse.

The Four from the Fantastik returned to London and supposedly retired. Several months later, however, Count Otto von Doom kidnapped William Shakespeare to have him chronicle his journey to the end of the Earth with the Four who are Frightful (Wizard, Medusa, the Sandman, and the Trapster). The Four from the Fantastik, including a pregnant Susan, go after them. At the end of the Earth, the find the city of Bensaylum. Emperor Numenor and his cousin, Rita, instantly fall for the Storms and Numenor allies himself with Count Doom to devise a plot to eliminate Reed and Grimm so Susan and James must remain. Rita, overhearing the plan, helps the Four and Shakespeare escape. In the struggle, the Wizard, who has mystical levitation powers, gets ahold of Numenor's magical trident and causes the entire city and surrounding ocean to rise into the sky. The entire group is distracted when they see the face of the Watcher and think it is God. Count Doom takes the Trident from the Wizard in an attempt to steal the power of God. This causes the entire city to begin falling back to Earth. The Four from the Fantastik manage to escape with William Shakespeare, but everyone else falls with Bensaylum to the bottom of the ocean and presumably die.

The Four from the Fantastik have since returned to London where Grimm has taken up acting. Reed and Susan live together and Reed continues exploring the mysteries of the world. John Storm spends much of his time in pubs drinking away the memory of his lost love, Rita.

Retrieved from "https://marvel.fandom.com/wiki/Four_from_the_Fantastick_(Earth-311)?oldid=5600977"
Community content is available under CC-BY-SA unless otherwise noted.