Four who are Frightful 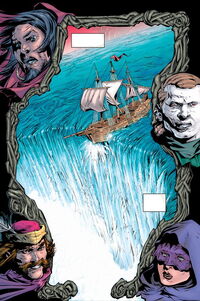 Base of Operations
London, England
Affiliations

Enemies
Four from the Fantastik
Origin

Place of Formation
Somewhere in England

The Four who are Frightful, comprised Jacobean versions of the four original members. The Sandman resembled his Earth-616 counterpart, except for pale skin and glowing eyes, and could conjure up nightmares. Medusa had snakes for hair, and could turn men to stone like her namesake. The Trapster wore forester's clothes, and was described by the Wizard as an "expert huntsman". The Wizard, in addition to seeing himself as the greatest scientist of the period, was also an actual magic-user.[citation needed]

The Four were hired by Count Otto von Doom to aid in finding the lost city of Bensaylum, the inhabitants of which, he believed, could repair his scarred face, and where the Four stated that they had already been. However, before falling off the edge of Bensaylum, the Wizard revealed to Doom that he and his group lied about ever going to the lost city and had only heard rumors of it. The Four who are Frightful were all killed in Bensaylum's destruction.[citation needed]

Retrieved from "https://marvel.fandom.com/wiki/Four_who_are_Frightful_(Earth-311)?oldid=5600980"
Community content is available under CC-BY-SA unless otherwise noted.