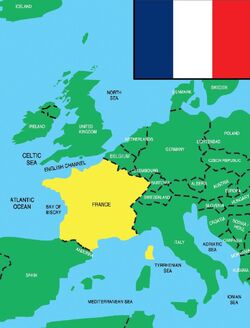 Its capital and largest city is Paris.

In Earth-5555, a future Earth of the 82nd century, power was divided between the country's barons in 8150. This led to constant land disputes among them, threatening an economic collapse.[3]

Like this? Let us know!
Retrieved from "https://marvel.fandom.com/wiki/France?oldid=5816691"
Community content is available under CC-BY-SA unless otherwise noted.