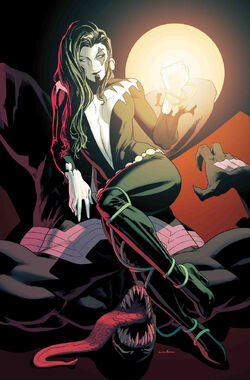 My sonic scream didn't hurt you, did it? I get angry when someone's hurting my man...

During her childhood, Frances Barrison was abused by her mother for being overweight, driving her to drugs and leading to her later fixation on becoming a mother herself.[6]

Barrison became a drug dealer, which exposed her to situations that ultimately damaged her sanity; namely, being shot in the head by a police officer, and exposure to the Darkforce Dimension via Cloak's containment.[7]

During Carnage's violent escape from the Ravencroft Institute, he came across Shriek, who was also incarcerated and wished to join him. He freed her, and the pair embarked on a killing spree. They attracted the company of several other homicidal super-villains: Demogoblin, Doppelganger, and Carrion; and formed a "family" with Carnage and Shriek as the "parents" and the others as their "sons". Shriek also used her psychic powers to increase the chaos by causing a number of New Yorkers to violently turn on one another, although the heroes were able to calm the people down before they did anything too serious, such as killing their own children. The killers fought a number of heroes, led by Spider-Man, but succumbed to in-fighting. Carnage slew the Doppelganger and left the others to their defeat and capture, although he was subsequently contained by the Avengers after a clash with Spider-Man, Venom and Black Cat.[8][citation needed]

Shriek was returned to Ravencroft Institute, and attempted to escape twice. Once, alongside the vigilante Mayhem and a handful of other inmates, she was defeated by Spider-Man and John Jameson before they managed to escape.[9] The second time, she and Carrion escaped and tried to become a family. In the end, she absorbed the Carrion virus into herself to release her "son" from his suffering.[10] She was returned to Ravencroft, where the virus (which she had been treating like an unborn child) was taken from her by the Jackal.[11]

After not being seen for a long time, she turned up at the Bar with No Name. At the Bar, several super-villains were betting on what was in a chrysalis recently formed. This chrysalis happened to be a homeless man nicknamed Freak after he had visited Doctor Curtis Connors' laboratory and injected himself with one of Connors' experiments.[12]

After Carnage was returned to Earth by Hall Industries, the company purchased Ravencroft with the intention of using Shriek (who had been responding well to the treatment being administered to her by Dr. Tanis Nieves) as a power source for the Carnage Symbiote, which had been separated from Cletus Kasady. Shriek was brought to Hall Industries, where exposure to the Carnage Symbiote, coupled with her witnessing guards beating Doppelganger (who had been attempting to rescue her) caused her to snap, and return to homicidal mania. After Cletus reunited with his Symbiote, Shriek and Doppelganger aided him in causing chaos throughout New York City, with Shriek gaining additional powers from another Symbiote that Carnage's had spawned. Growing fearful of Shriek, the Symbiote left her in favor of Nieves, its initial host, to create Scorn, who forced Shriek to use her powers to weaken Carnage, allowing Spider-Man and Iron Man to defeat him. In the aftermath, Shriek was put in a coma, Scorn having done some unspecified damage to her brain.[13]

After she recovered, Shriek was recruited by Caroline Le Fay to join the Doom Maidens to battle the Defenders.[14]

She reunited with Carnage and was forced to save him from Deadpool in Tulsa, Oklahoma. It was during a car chase in which they crashed injuring Shriek. Enraged by this, Carnage attacked, throwing Deadpool a great distance. Carnage took Shriek to recover at the Mercury Team base, where Deadpool's craziness caused him to question his own sanity. They broke into a psychiatric hospital, where they forced the patients and staff to answer questions on Nihilism. After Deadpool obtained a symbiote, he used his new shapeshifting abilities to attack Shriek. After a skirmish with Carnage, Deadpool captured Shriek, uses his symbiotes to disguise her as himself, and tricked Carnage into attacking her; this caused Carnage to suffer a mental breakdown, and, as a result, he willingly handed himself over to the authorities.[15]

She recovered and joined the Sinister Sixteen created by Boomerang.[16] After their defeat they were abandoned by Boomerang. They plotted their revenge at the Bar with No Name. They were however easily defeated by the Boomerang's new allies: Speed Demon, Beetle, and Overdrive.[17]

Shriek teamed up with Griffin, Gibbon, and Ruby Thursday to attack a police station. The team was however defeated by Spider-Woman's new apprentice, the reformed criminal Porcupine.[18]

Detroit-based supervillain Nain Rouge hired Shriek and a new Firebrand to be his enforcers, bringing them into conflict with the Great Lakes Avengers.[19]

Shriek later appeared as a secret ally to Kraven the Hunter at the time he was leading the NYPD's SWAT Team into hunting the human-dinosaur hybrids living beneath New York City. She made herself known where she used her sonic attack on Venom and then collapsed the ceiling on him much to Kraven's annoyance. Shriek stated to Kraven that he can have the head of Eddie Brock after their mission.[20]

Recruited by Carnage into the Cult of Knull, Shriek resumed her Sandra Deel persona and served as the cult's public face during their takeover of Doverton, Colorado. After an altercation with John Jameson, Shriek assisted Carnage and the Doppelganger in sacrificing the citizens of Doverton to Knull, claiming their codexes.[4]

After Carnage's takeover of Ravencroft Institute, Shriek offered herself as a sacrifice to revive Demogoblin, allowing Carnage to rip out her spine to claim her codex of the Scorn symbiote. Her corpse was subsequently possessed by the Demogoblin, who changed its name to "Demagoblin" to commemorate having a female host.[2]

Shriek is a mutant[5]

She is vulnerable to mental assaults by psychics.

She is propelled by the air directing their sonic bolts to the ground.

Like this? Let us know!
Retrieved from "https://marvel.fandom.com/wiki/Frances_Barrison_(Earth-616)?oldid=6472286"
Community content is available under CC-BY-SA unless otherwise noted.