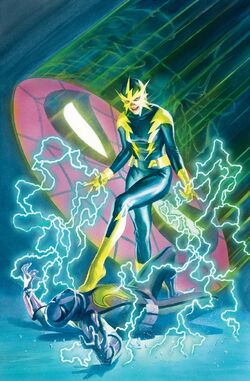 I watched this game from the sidelines for years. And yeah, I saw plenty of gross dudes get a leg up along the way. But now that I got my turn? I'm just here to raise some Hell, make some money -- and maybe a little payback along the way.

Francine Frye was a New Yorker who was obsessed with super-villains as a form to escape from the real world. She was a regular accomplice of Electro.[3] While on the run after having his powers tampered with by Otto Octavius, Electro went to Francine's apartment for shelter. Even though he warned her of his malfunctioning powers, Francine tried to get intimate with Max, claiming that she simply couldn't help it. They eventually kissed, and Francine was accidentally fried.[4]

After recovering genetic material from her corpse, the Jackal brought her back to life in the form of a clone, initially as an incentive to have the recently-depowerd Electro work with him. After a procedure that failed to give Electro his powers back, the suit that was meant to transfer its energy to him started to discharge into Francine. It was theorized by the Jackal that having used genetic material from Francine's cheek after she kissed Electro had mixed up her DNA.

Francine was pulled by the energy discharge of the suit, and she kissed Electro in order to grow in power. She ended up absorbing all of the suit's power, but accidentally fried Electro in the process. The Prowler, who had been sent to infiltrate the New U Headquarters, revealed himself while trying to save Electro and Francine was sent after him. She accidentally killed the Prowler during the chase, requiring the Jackal to bring him back to life. Frye was later given an Electro costume and took Dillon's place in the Jackal's plan.[3]

Following the Jackal's downfall, Francine embraced her circumstances and decided to become a supervillain for the sake of destruction and money.[5] She briefly became part of a new incarnation of the Sinister Six led by the villainous Iron Spider which attempted to steal a decomissioned S.H.I.E.L.D. Helicarrier,[6] but their plan was thwarted by the younger Spider-Man and the Champions.[7] Electro then partnered with a group led by Boomerang and carried out a theft at the American Museum of Natural History, which was unbeknownst to Boomerang's partners on behalf of the Kingpin. After carrying out the heist and being surrounded by authorities, Boomerang handed over the loot to the Kingpin and fled, leaving Electro and his other partners behind.[1]

Deciding to instead work alone, Electro next interrupted a Broadway stage musical starring famous actress Melanie Daniels to hold her for ransom. Her plan was foiled by audience member Mary Jane Watson, who had Carlie Cooper distract the villain to switch places with Daniels wearing her same outfit, then bought enough time for the stage manager Terry Ford to unload a water tank on Electro, neutralizing her powers. When Electro was being taken away, she was freed from police custody by the Syndicate,[8] who offered Electro to join their all-female criminal enterprise. She initially refused until the Syndicate disclosed they intended to go after Boomerang for revenge.[5] Similarly to Boomerang, the Syndicate's leader Beetle arranged with the Kingpin behind her partners' back to hand him over Boomerang.[9] Despite their shared disgruntlement towards Beetle, the Syndicate agreed to help Boomerang evade arrest after he disclosed with them the secret reason the Kingpin was after him. As a result, all Syndicate members except Beetle were apprehended, but Beetle broke them out afterwards.[10]

Electrostatic Energy Generation: Francine possessed either similar or the same powers as the original Electro, which includes the generation of electrostatic energy which she can release or harness for a number of effects.[3]

Water: Due to her lack of experience she was easily defeated by Spider-Man in their first encounter when Spider-Man exposed her to water effectively knocking her out.[11]

Riding Electricity: Similarly to Max Dillon, Francine can use her powers to generate an electricity slide she rides and propels from the ground.[3]

Like this? Let us know!
Retrieved from "https://marvel.fandom.com/wiki/Francine_Frye_(Earth-616)?oldid=6554820"
Community content is available under CC-BY-SA unless otherwise noted.