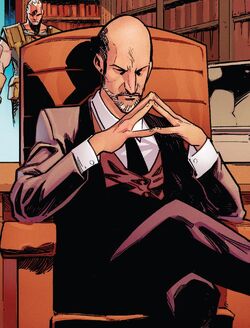 Dr. Francis Talbot was a multi-millionaire doctor who hired the mercenary Deadpool to travel back to the past to save his grandson from being killed, but learned Deadpool used the time travel device to change historical points in Earth's past instead. This came to the attention of the mutant soldier Cable, who visited Talbot to remind him what the consequences are when messing with the time-stream. After their discussion, Talbot supplied Cable with some more prototypes so he and his team X-Force could go after Deadpool.[1]

Like this? Let us know!
Retrieved from "https://marvel.fandom.com/wiki/Francis_Talbot_(Earth-42466)?oldid=6006756"
Community content is available under CC-BY-SA unless otherwise noted.