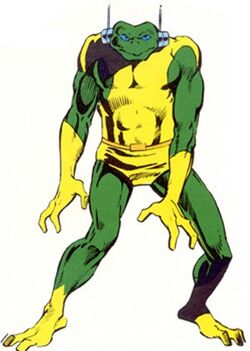 When the Ape Man, Cat Man and Bird Man renamed themselves the Unholy Three, Frog Man left the group but returned when, as the Ani-Men again, they were employed by Count Nefaria. Given genuine super powers which replicated his earlier power suit but gave him a frog like appearance, Frog Man was with the Ani-Men when they fought the X-Men and were defeated[3]. Later, still in Nefaria's service, he and the other Ani-Men fought Iron Man but were apparently killed when the assassin Spymaster blew up the building they were in.

Wields the physical attributes of a frog; like superhuman agility and strength in his legs to leap long distances.

Like this? Let us know!
Retrieved from "https://marvel.fandom.com/wiki/Francois_Le_Blanc_(Earth-616)?oldid=5495557"
Community content is available under CC-BY-SA unless otherwise noted.