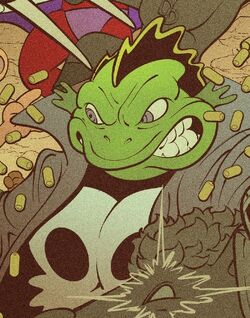 ...at that moment, Frank Carple ceased to exist, and the Punfisher was spawned! Scourge of crime. Enemy of evil. Every mother's nightmare. Some origin, eh, Spidey? Spider-Ham??? Sleep through my origin, will ya??

Frank Carple was a U.S. marine who spent three tours of duty in Viet Ham where he learned to use anything as a weapon. After the war, he settled in New York City and married his wife, Sealia. After Sealia refused to buy Girl Scout cookies from a gangster's daughter, the mob came back and stuffed her full of hundreds of oatmeal cream pies. Frank Carple swore vengeance as the Punfisher.

When Spider-Ham gained the powers of Capitan Zooniverse, Punfisher was one of the many villains who was defeated by him and sent into orbit.[1]

He was among Spider-Ham's rogues that were transported to the Prime Marvel Universe by Ringmaster, used as his puppet on Earth-28204, and then scattered across the Multiverse for individual capture by Spider-Guin.[2]

Seemingly those of Frank Castle of Earth-616.

Frank Carple, the Punfisher, is a parody of Frank Castle (Earth-616), the Punisher.

Like this? Let us know!
Retrieved from "https://marvel.fandom.com/wiki/Frank_Carple_(Earth-8311)?oldid=5862546"
Community content is available under CC-BY-SA unless otherwise noted.