watch 01:00
Marvel's The Punisher - Teaser Trailer
Do you like this video?
Play Sound
Punisher 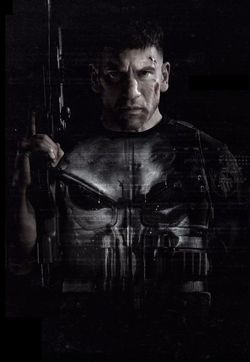 Lieutenant Frank Castle was a highly decorated Force Recon Marine known for his acts of heroism in the War on Terror, serving multiple deployments in Afghanistan and Iraq under the command of Ray Schoonover. Despite the heroic images given, Frank had been involved in a classified C.I.A. task force participating in Operation Cerberus, an illegal operation designed to assassinate individuals who have witnessed war crimes perpetrated by soldiers under the command of CIA operative William Rawlins.[4] Disgusted with what had transpired, even with a botched operation that caused massive casualties for the task force, Castle exits military service to spend time with his family. However, due to Castle's vocal scrutiny of Rawlins, the CIA operative, with support from Schoonover,and Department of Homeland Security agent-in-charge Carson Wolf, have engineered an assassination attempt on Castle and his family under the guise of a drug bust gone wrong.[5]

Castle's family perished during the botched raid, but Castle himself survived a fatal gunshot wound to the head after being clinically dead.[6] Shortly after regaining consciousness, Castle conducted direct strikes against the Kitchen Irish, Dogs of Hell, and Mexican Cartel while attempting to search out the murderers of his family. With guidance from Wilson Fisk on Ryker's Island Castle learns from a prisoner of an individual named the Blacksmith being responsible for setting up the meeting that led to the deaths of his family.[7] Shortly after exiting Ryker's Island, Castle deduces Schoonover's identity as the Blacksmith and saves Karen Page from being murdered by Schoonover.[8] Shortly after killing Schoonover, Castle kills the remnants of the three criminal organizations while taking advantage of a published article by Page announcing Castle's "death" in a house fire.[9][1]

Despite attempting to live a peaceful life, Castle has been contacted by David Lieberman, a former National Security Agency analyst who had video evidence on Castle's participation in Operation Cerberus.[5] Shortly after learning of Lieberman's blackballing by the government agencies for "going outside the chain of command", Castle and Lieberman strike an uneasy alliance to pursue Wolf and Rawlins. During the missions of retribution, Castle successfully kills Rawlins[10] and maims former U.S. Marine squadmate Billy Russo for the latter's role in aiding Rawlins.[11] As a token of thanks for killing Rawlins, Castle's criminal record is expunged by the C.I.A.

Frank Castle was a hardened soldier who wasn't troubled by killing others or even watching his own friends die. Despite this, he valued the lives of his fellow men above all else, and would risk his own life against suicidal odds to keep them alive. Outside of the battlefield, Frank was a loving husband and father. While he faced enemy soldiers and impossible situations without hesitation, the only time he ever truly felt scared was just before he returned home to his family. Frank was especially close with his daughter, and would read her bedtime stories from her favourite book every night before he went to war.[12]

After their brutal murder and his near-death experience, Frank became a broken man. He holds no regard for the justice system that failed him and his family, nor the gangs he holds responsible for their deaths. Above all, however, he blames himself for their deaths; to him, protecting his family was the most important job he had, and he feels that their deaths were on him for not reacting to the danger fast enough.[6]

Frank feels no sympathy toward those he deems guilty, and will slaughter a criminal without a second of hesitation. However, he won't kill anyone that isn't a criminal themselves, like Daredevil, whom Frank spared on multiple occasions despite their constant clashes. Overall, Frank doesn't view himself as a hero or a monster, but just as someone doing what needs to be done.[13]

Castle is seen performing overhand grip pull-ups with at least two cinderblocks chained to his dipping belt, meaning he can lift an additional 60-70 pounds along with his own bodyweight.[15] He easily used a 20-pound dumbbell as a melee weapon, threw a kettlebell at a Russian thug's face, easily wielded bar with one hand, as well as a heavy metal plate as an improvised shield.[16]

Like this? Let us know!
Retrieved from "https://marvel.fandom.com/wiki/Frank_Castle_(Earth-199999)?oldid=5872950"
Community content is available under CC-BY-SA unless otherwise noted.