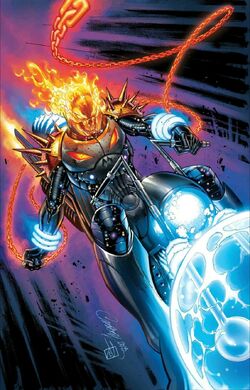 Sadists, psychos and killers. Don't matter what planet they're from. All deserve to be punished.

This Frank Castle's earlier life seemingly mirrors that of the Frank Castle of the Prime Marvel Universe.[2][5]

During the heroes of Earth's last stand against Thanos, the Punisher was hit in the head by the debris of a building the Hulk was thrown into and died, his soul being subsequently sent to Hell. Willing to give anything in order to punish Thanos for slaughtering his planet, the Punisher signed a demonic deal with Mephisto and became the latest Ghost Rider. When he returned to Earth, however, Thanos was already gone and everything on the planet was dead. The Ghost Rider spent the next countless years alone, roaming endlessly and undying with no one to kill or love. After even Mephisto fell silent to his calls, he began to lose his mind.[2]

When a badly injured Galactus arrived on Earth seeking help against Thanos, unaware that the population of Earth had already been killed by him, the Ghost Rider offered the dead planet to him in exchange for the chance of punishing the Mad Titan as his herald; an offer that the Great Devourer accepted. Together they roamed the cosmos on a quest to halt Thanos' systematic annihilation of every living being in existence, which led them to become legends. Their story lasted centuries, but came to an end once they finally confronted Thanos, who beheaded Galactus as he approached to battle. The undying Rider was offered by Thanos the chance to see more evil than he could punish in a thousand lifetimes, and thus became his servant.[2]

At the behest of King Thanos, the Rider used the Time Stone to drag a younger Thanos to the future[4] so he could help his older self in winning the love of Death by killing the Fallen One, the one being who managed to elude him.[6] Unbeknownst to the Rider, King Thanos didn't need his younger self to kill the Fallen One; he needed him to kill himself in order to finally be by Death's side.[7] After the Fallen One used Mjolnir to smash the Rider to bits,[8] the time-displaced Thanos realized his older self's true motivations and went on to prevent this future from ever happening.[7]

Frank was retrieved from his dead timeline by a Odin of an alternate reality[5] and rewarded with Valhalla,[9] but he didn't fit in with the rest of its inhabitants. Seeing that Frank didn't want to be there, Odin returned his powers to him and offered to send him to any time and place he wanted. Frank chose to be sent back in the time to the day Thanos was born so he could kill him before he grew up to become a monster. Upon using his Penance Stare on baby Thanos, Frank realized he wasn't evil yet and decided to take him under his wing instead as to change his future.[5]

Knowing Galactus was to devour Markus-Centauri at that point in time, Frank traveled to the planet to try and convince the Devourer of Worlds into helping him, but he refused to do so after accessing Frank's memories. With the Watcher bearing witness, an angry Frank vowed to raise Thanos on his own, consequently creating a timeline where Thanos grew up to become something worse. The Guardians of the Galaxy of said timeline tried to change their future to the best by killing Thanos, but Frank (and, later on, baby Thanos) killed them all. They were subsequently greeted by Thanos' future self, who sported the same clothes Frank used as the Punisher.[10]

The future Thanos showed Frank the authoritarian world he had built on his example, including a past version of himself living with his wife Maria. Realizing the consequences of his intervention in his life, Frank killed the future Thanos and returned his baby self to the past, erasing the alternate timeline. Death appeared before Frank to confirm that his actions had nonetheless instilled the baby Thanos with the bloodlust that would make him her agent.[11]

By his own admission, Frank spent the following years on Earth interfering with the lives of its heroes until he tried to save his own family from their deaths. Uatu intervened, putting history on the right track and using the Infinity Gauntlet to make everyone - including Frank himself - forget his actions. He spent years imprisoned in the Raft until he pieced his memories together and was freed through Uatu's indirect intervention. Frank also claimed that he later killed the Watcher during his fateful encounter with Nick Fury following the robbery of his citadel and one his eyes.[12]

Some time afterwards, Frank sensed Thanos' death at the hands of his daughter Gamora. Soon after discovering his beheaded corpse, he was approached by Eros, who had come to collect it and his brother's will.[13] He was present at the gathering held by Eros to show Thanos' will, which revealed that he had placed his consciousness into another living being before dying. As those gathered discussed what to do with this new information, they were attacked by the Black Order and sucked into a black hole. Frank was rescued thanks to Beta Ray Bill and recruited into the Guardians of the Galaxy by Peter Quill.[14]

After clashing with Groot and Bill, he left the group and joined the Dark Guardians in their quest to hunt down Gamora as the most likely host for Thanos's resurrection.[15] They tracked her down using her former lover Nova and clashed with the Guardians of the Galaxy to take her.[16] When they were ready to execute her, however, they were attacked by the Asgardian goddess Hela and the Black Order. Hela easily took down Frank using her power over dead beings, leaving him a flaming skeleton. Hela then revealed that Starfox had been Thanos' chosen vessel all along. Thanos' consciousness asserted itself in Starfox, and he left with Hela and the Order.[17]

Frank was also forced to come with Hela. During the Guardians and Dark Guardians' assault on Knowhere to stop Thanos' resurrection, Hela was knocked off a platform, causing her control over Frank to weaken. Star-Lord attacked Frank, but Frank was in no shape to fight and told Star-Lord that without Hela's power, he could no longer hold himself together and eventually collapsed into a pile of bones. Frank was then transported into Hell, where he was greeted by its ruler Johnny Blaze.[18]

Challenge of the Ghost Riders

Blaze later forced Frank to possess Avengers Mountain and attack the Avengers when they tried to exorcise Robbie Reyes.[19]

Revenge of the Cosmic Ghost Rider

Leaving the Earth behind, Frank traveled the cosmos to punish villains for their sins. This got him in trouble with the Shi'ar Empire and he ended up subdued by the Imperial Guard. Due to his crimes, Frank was sent to an alien prison located in an asteroid which was ran by the Shi'ar. When some of the other prisoners began beating him up, he transformed into the Cosmic Ghost Rider and started to kill them. This, however, freed a mysterious creature imprisoned there that drained the Rider of his power, leaving him nothing but a skull. Due to the danger the creature posed, one of the guards activated the prison's self-destruct program, destroying the prison and seemingly the creature as well.

Months later, some space pirates arrived and salvaged what remained of the prison and its prisoners, including the Rider's skull. Frank then awakened and killed every member of the crew in order to rebuild his own body, until only Camille Benally was left. After destroying the entire ship, he used his Penance Stare on the girl, but found out she was actually innocent.[20] The duo fought various criminals throughout the universe, eventually coming into conflict with the Cosmic King, who threw Cammi into a wormhole.[21] Enraged, the Cosmic Ghost Rider tried to destroy the Cosmic King to no avail, as he proved to be too powerful. Once the Rider was able to get the upper hand, the Cosmic King offered Frank's long lost soul, which the King had stolen from Mephisto, back to him. Frank accepted the offer,[22] then killed the Cosmic King.

When Cammi arrived, having briefly traveled through time because of the wormhole, she revealed the Cosmic King was actually possessed by an "ancient space demon parasite," which originally wanted Frank as its next host, it being the same creature Frank accidentally freed from the Shi'ar prison. The Mephisto from Frank's home reality arrived soon afterward, wanting to retrieve the soul he rightfully owned. Since Frank had already reclaimed his soul, he claimed Cammi's instead.[23] Fighting his way through Hell, Frank eventually returned to the Hotel Inferno and confronted the Mephisto of the Prime Marvel Universe. Mephisto refused to give Cammi's soul back, but offered a deal exchanging it for Frank's soul. He accepted, became the Cosmic Ghost Rider once more, this time in service to the Mephisto of the Prime Marvel Universe, and revived Cammi. Sadly, the "ancient space demon parasite" that had possessed the Cosmic King immediately seized Cammi and turned her into its next host. The demon then drained Frank's powers yet again, forcing him to drain the lifeforce of various Brood to rebuild himself months later so that he could begin his quest to free Cammi once more.[24]

Spirit of Vengeance: As the Ghost Rider, Castle has the following powers:

Power Cosmic: Like all the other Heralds of Galactus before him, the Rider wields the Power Cosmic. Presumably, all of his physical capabilities have been enhanced; to what extent, though, hasn't been revealed. So far, the additional powers he has demonstrated thus far are:

Seemingly those of the Punisher of the Prime Marvel Universe.[2]

Weapon Fabrication: Castle still had the capacity to recreate weaponry out of any mundane bits of technology, such as fabricating a gun made from pieces of Tony's armor.[26]

Mental Illness: The countless years the Rider had spent on Earth alone had caused him serious mental issues.[2]

Necromancy: As the Rider is technically dead, any entity with command over the dead, such as a deity of death, can control him as well.[27]

Ghost Rider's Chain: Chains forged from the bones of Cyttorak that are practically indestructible as not even someone as strong as Thanos could break them.[4] The chains can also be used a whip. When combined with the Rider's super strength, they are capable of ripping through opponents.[28]

Like this? Let us know!
Retrieved from "https://marvel.fandom.com/wiki/Frank_Castle_(Earth-TRN666)?oldid=5827064"
Community content is available under CC-BY-SA unless otherwise noted.