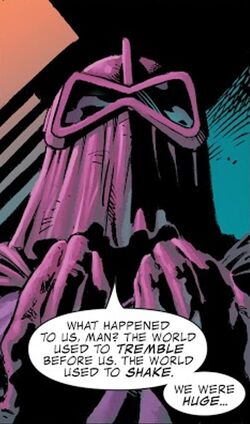 You know, this is a respectable office building! I'm not very happy about having tenants who seem to be involved with some of the most despicable criminals of all! Now, I'm a broad-minded man, but must you defend such cut-throats and knaves?

Manager of an office building whose tenants once included the Law Firm of Nelson and Murdock, Frank Farnum leads a double life as criminal mastermind, the Masked Marauder.[3] First attaining notoriety commanding a gang of masked criminals against Spider-Man, Farnum attempts to play Spider-Man off his blind lawyer-tenant's alter ego, having members of his gang impersonate Daredevil and attack the wall-crawler.

As Spider-Man attacks the real Daredevil in retaliation, Farnum's men break into the World Motors Center and stole an experimental engine[4].

Daredevil convinces J. Jonah Jameson to run a fake editorial in the Daily Bugle detailing how the experimental engine is worthless without its fueling formula. Farnum is lured into breaking into the World Motors Center again. While his gang is ambushed and defeated by Daredevil and Spider-Man, Farnum himself escapes disguised as a uniformed guard[5].

The Masked Marauder and his men next break the Gladiator out during his court proceeding. Farnum intends for Potter to go after Foggy Nelson, at the time pretending to be Daredevil. Unwilling to become the Marauder's servant, Gladiator attacks the Marauder.

Their fight is interrupted by a member of the Marauder's gang, surprising the two combatants with evidence that Foggy and Daredevil could not be the same person. They decide to set aside their differences and work together[6].

Farnum creates an android called the Tri-Man, powered with the skills of three gangsters. The android storms the ring during a boxing match at Madison Square Garden, challenging Daredevil to a duel. When Daredevil begins winning, Farnum notices Foggy Nelson and Karen Page in the crowd and threatens to kill them unless Daredevil forfeits[7]. Capturing Daredevil, Farnum plans to add his powers to the Tri-Man. Breaking out of his prison, Daredevil fights the Marauder.

Farnum, in hopes of convincing the Maggia's leading factions to make him their leader, then transports Daredevil and Gladiator to an arena where they fight for their amusement. Gladiator again refuses to fight, especially after Daredevil saves him from a lion attack in the arena. This makes the Maggia families lose interest in the spectacle and Farnum[8].

Obsessed with discovering Daredevil's identity, Farnum teams up with Stilt-Man. In an encounter with Daredevil, he seemingly perishes in his own device[9], only resurfacing later stating that the force field he used was actually a teleportation device.

As he was legally dead, however, his holdings -including several buildings he owned and managed- were inherited by his brother Barry, who also had connections with the mob.[10]

Eventually becoming part of the Maggia, the Marauder once nearly consolidated his power.

Last seen at the wake for his former ally, Stilt-Man, at a Bar with No Name, Farnum was among several other super-villains and the Punisher. The Punisher poisoned their drinks and blew the bar up, leaving them all supposedly dead.[11] It has been revealed that many of the villains survived, having their stomachs pumped and treated for third degree burns.

Like this? Let us know!
Retrieved from "https://marvel.fandom.com/wiki/Frank_Farnum_(Earth-616)?oldid=5568091"
Community content is available under CC-BY-SA unless otherwise noted.