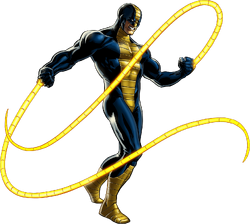 S.H.I.E.L.D. runs on rookies like you. They'll send you to the worst places in the world, to fight things you can't imagine. Year after year, you'll bleed for them, all to defend people who'll never thank you. Then one day you'll limp home after fighting some costumed freak that killed half your squad, and you'll realize you can't pay rent, and your only friend is a bottle. Think you'll feel like a hero then?

A former agent of S.H.I.E.L.D., Frank Payne began a criminal career motivated by the lure of money and power, allying himself to numerous villains as part of his job as a mercenary.

He first faced S.H.I.E.L.D.'s alliance when escaping the Ryker's Island along other inmates during Juggernaut's escape. He later joined The Hood's criminal army during their alliance with The Hand in which they practiced reviving Hydra soldiers from the WWII using magic they would later use to revive the Red Skull for the Syndicate.

He later helped the Hand to steal mystic artifacts in Chinatown, but was stopped by Iron Fist. He was hired by the Brotherhood of Mutants in order to help them proclaim Manhattan as the new mutant nation. Payne was later hired by the Hellfire Club to help them move the Living Pharoah from San Francisco to New York.

After winning an excessive force lawsuit against Hercules, Constrictor realized he had more money that he would even need and decided he wanted to return to the life of a hero.[1]

Seemingly those of the Frank Payne of Earth-616.

Like this? Let us know!
Retrieved from "https://marvel.fandom.com/wiki/Frank_Payne_(Earth-12131)?oldid=6057573"
Community content is available under CC-BY-SA unless otherwise noted.