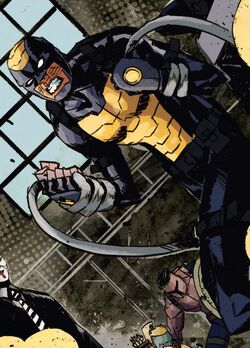 'Manhandling?!' Are you serious? I'm a hired assassin. He's lucky he's getting away with a manhandling.

Frank Payne was an agent of the international espionage organization S.H.I.E.L.D., and the father of an adult daughter, Mia. When S.H.I.E.L.D. needed a costumed "supervillain" to go undercover in the criminal organization called the Corporation, Frank was given a snake-themed costume and a pair of wrist-mounted electrified metal coils. Using the false identity of Frank Schlichting and the codename of "Constrictor", he infiltrated the group, only to suffer a nervous breakdown and become a career criminal in earnest.[2]

As a result of his defection, S.H.I.E.L.D. allowed his daughter to believe that he had died. As the Constrictor, "Schlichting" debuted in combat against the Hulk,[5] and would remain an independent mercenary and criminal after the dissolution of the Corporation. He battled numerous heroes over the years, including repeated encounters with Captain America, Iron Fist, Luke Cage, Spider-Man, the Thing and even the NFL Superpro. Although Luke Cage and Nick Fury eventually uncovered Payne's former identity, he chose to retain the Schlichting alias and to allow his daughter to believe that her father was dead.[2]

Constrictor was also invited to join the Serpent Society, who he turned down and subsequently tried to turn over to the Avengers. Anaconda later exacted revenge on him. While in the hospital recuperating from the beating, he was nearly killed by the Scourge of the Underworld disguised as a nurse, but was saved by Captain America.[6]

He later had a showdown with his stepfather McAvey, who had murdered his mother.[7]

Constrictor later met Deadpool as he and Titania moved in with him as his roommates. During their uncomfortable living situation, Constrictor was convinced that Titania was actually a man. It would turn out that he was right that she wasn't what she seemed; but not about her gender as Titania was revealed to actually be the mutant shapeshifter and Deadpool's former lover, Copycat.[8]

He joined the seventh incarnation of the Masters of Evil.[9] It was also later revealed that Constrictor had been part of a very short-lived rendition of the Wizard's Frightful Four.[10]

At one point he was one of the many mercs hired to kill Alex Hayden, who was at this time thought to be Wade Wilson (Deadpool) although he stated that Wilson was a hard-ass so Hayden couldn't be Deadpool. Hayden then broke Constrictor's nose. He was later seen in the same issue being used, or rather his vibranium coils were used, to drag the Rhino into a river. Somehow both escaped.[11]

Frank was next recruited by Lucia von Bardas to attack Nick Fury and a group of heroes who were involved in his Secret War in Latveria a year earlier. The hired mercenaries were each a component of a bomb designed to destroy the city. Fury and his team were able to stop them and arrested them all including the Constrictor.[12]

After a severe beating from Hercules, the Constrictor was awarded several million dollars in a lawsuit. Shortly thereafter, Constrictor was abducted from a high-society event (along with Nighthawk and The Thing and several others) by Arcade. Constrictor helped the heroes and his fellow captives escape. Nighthawk, rich himself, convinced the Constrictor that with all his money there was no need to be a criminal anymore. Constrictor took this message to heart and decided to be a hero.[13] He was employed by S.H.I.E.L.D. as a member of the new Six-Pack.[14]

Constrictor was present at an all-superhuman charity poker tournament hosted by the Thing (who also had a hand in the Constrictor's apparent reformation), where Hercules regained a large portion of the money he lost to the Constrictor in a non-tournament side game.[15]

Constrictor was eventually recruited into the Shadow Initiative by Henry Peter Gyrich.[16] While fighting KIA, Constrictor lost both of his arms and was given mechanical arms instead.[14]

After Norman Osborn took over the Initiative, Constrictor became a prominent member of the organization and a close friend of the Taskmaster. Over the course of his career there, he eventually graduated to a more managerial position and began dating Diamondback, a fellow Initiative member. They grew very close, but during the escape of a prisoner, Frank discovered that Diamondback was actually a spy for Captain America and the Avengers. She did her best to assure him that her love was real, and Frank decided to keep her secret because he was afraid she might be hurt.[17]

During the events of Siege, Frank fought for Osborn with the villains, and was in the immediate proximity of Asgard when it fell. His last sight was Diamondback running towards Captain America, who had arrived with the Avengers. He assumed that, because Diamondback and the Captain had dated previously, she was going back to him and did not really love a "loser like him." He then left with the Taskmaster to renew a life of crime.[18]

Constrictor attended Arcade's birthday party, but found him insufferable. His complaints were overheard by Arcade, so he had him ejected from his party. Not long afterwards, Arcade opened a bar called the Hole in Bagalia, which Constrictor tried to rob. However, he was tricked into pressing a button that launched a giant hammer at him, knocking him out.[19][20]

He was later hired by the Philadelphian crime-lord Lord Ogre to fight Venom. Constrictor worked with Lord Deathstrike, and Jack O'Lantern, all employees to Lord Ogre. Venom was able to escape in the midst of the fight.[21]

Constrictor was with the Masters of Evil when Baron Helmut Zemo became the new leader following the death of Max Fury. Constrictor became the bodyguard of Baron Zemo.[22]

Constrictor decided to retire from his criminal life and live peacefully with Diamondback, who had become his fiancée. However, Frank fell victim of a terminal (and most likely pulmonar) illness that was only diagnosed at a late stage. He couldn't receive the proper treatment because he didn't even have insurance, and so Rachel rejoined the Serpent Society (now Serpent Solutions) to get money for his treatment.[23] Following Frank's death, his mantle as Constrictor was taken up by his son, since Frank had left his battlesuit to him in his will.[4]

The Constrictor is an above-average athlete and skilled in conventional military and espionage training.

Normal human strength of a man of his age, height, and build who engages in moderate regular exercise.

Like this? Let us know!
Retrieved from "https://marvel.fandom.com/wiki/Frank_Payne_(Earth-616)?oldid=6494518"
Community content is available under CC-BY-SA unless otherwise noted.