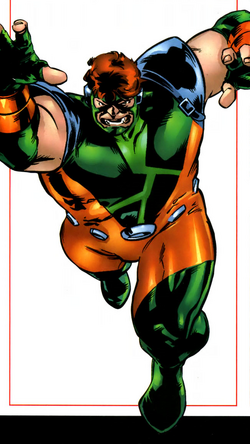 Little is known about the man who became Powderkeg. He was a mercenary hired to steal high-tech circuitry for Brazilian crime lord Kristina Ramos. He ran afoul of Captain Marvel (Monica Rambeau) who had thought she lost her powers after stopping a mutated Marrina. She encounters Powderkeg and used her new powers to defeat him.[1]

Powderkeg fought the Avengers during a failed mass prison escape occurring at the Vault. During the incident, he follows the leader of the breakout, Venom. Teamed with Mentallo and Vermin, they temporarily defeat Iron Man and Hank Pym. The entire breakout is soon neutralized by technological means, with energy pumped through Mentallo.[2]

Powderkeg was later recruited by Doctor Octopus to join his incarnation of the Masters of Evil during the Infinity War. The Masters of Evil confronted the Guardians of the Galaxy in the Avengers Mansion. Everyone becomes embroiled in a fight against evil doubles of both teams. Magus, the villain behind the Infinity War, had recruited an army of super-powered doubles to defeat and absorb Earth's superpowered resistance.[3]

At some point, Powderkeg was finally captured and imprisoned, where he would later team up with a number of other villains against the She-Hulk, although they are defeated.[4]

Powderkeg later appeared as one of the patrons of a bar catering to villains.[5]

Powderkeg is superhumanly strong and highly resistant to injury. Furthermore, he sweats a nitroglycerin-like compound, which detonates on impact, causing him to explode whenever he hits his enemies or whenever he gets hit. He can cause small explosions when he slaps his hands together.

Like this? Let us know!
Retrieved from "https://marvel.fandom.com/wiki/Frank_Skorina_(Earth-616)?oldid=6119186"
Community content is available under CC-BY-SA unless otherwise noted.