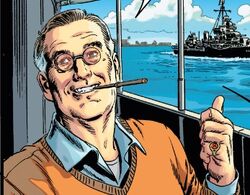 Franklin Delano Roosevelt (January 30, 1882 – April 12, 1945), often referred to by his initials FDR, was the thirty-second President of the United States. Elected to four terms in office, he served from 1933 to 1945 and was the only U.S. president to have served more than two terms. Presumably, the fictional character's history is mostly the same as his real life counterpart. The scope of this article is to cover the activities of the fictional character and his interactions in the Earth-616 universe. For a full history of the real life FDR, consult Wikipedia.

As early as 1939, before the United States officially entered into the war, Franklin Roosevelt kept interested in the Nazis war machine was creating. Hearing of the Nazi's Project: Nietzsche -- an attempt to create a super-soldier -- Roosevelt had money secretly invested in attempts to create super-humans as well. Among these was Phineas Horton's invention of the Human Torch. While meeting with officials aboard the yacht owned by his millionaire friend Vincent Astor, Roosevelt learned of the implications of the android, that it would burst into flames, and also of the Nazis's latest operation: dropping depth charges into the Sargasso Sea.[2]

Soon super-humans began cropping up all over America, fighting Nazi spies and other menaces seeking to destabilize the United States before the country entered the war. The first recorded encounter that Roosevelt had with these so-called "Marvels" was when he congratulated Professor Philo Zogolowski for using his robot Electro to defend America from Zombies created by Dr. Bruno Varoz.[3] Roosevelt later personally thanked the Sub-Mariner for destroying a fleet of Nazi battleships.[4]

Later that year, the United States government began their own version of Project Nietzsche called Operation Rebirth to create an army of American super-soldiers. On September 14, 1940 in a secret meeting with state officials, Roosevelt sanctioned the creation of a robot called TESS-One a robot constructed to eliminate super-soldiers that might go rogue, before the project was put underway.[5]

On Roosevelt's birthday, he became a target of Nazi spies who sent him the bodies of military officials who were shrunk to doll size. Learning of this, the Terror tracked down the Nazis and shut them down.[6]

Soon after, the Sub-Mariner rallied with other undersea races to renew aggressions towards the surface world. In response, Roosevelt mobilized American troops to deal with the threat, but ultimately, Namor was stopped by the Human Torch.[13]

On November 22, 1941 another attempt to assassinate Roosevelt was thwarted by Captain America and Bucky.[14]

Following the attacks on Pearl Harbor on December 7th, 1941, Roosevelt announced that the United States was entering the war to combat both Nazi Germany and Imperial Japan. He later called a meeting with British Prime Minister Winston Churchill.[15]

Early in 1942, President Roosevelt hosted Churchill's extended visit to the United States and Canada to discuss the ongoing war effort.[16] Later that year, when the majority of the Invaders were put under the hypnotic control of the Red Skull, Roosevelt was briefed of the situation by the FBI. When Bucky forced an audience with the President, he asked for assistance in rescuing his friends. However, Roosevelt discouraged the boy from taking action, telling him that war was no place for a youth.[17] Bucky eventually proved Roosevelt wrong by not only forming the Liberty Legion,[18] and rescuing the Invaders.[19]

On June 19, 1942, Roosevelt and Churchill met once again for a private meeting about the war effort. The Invaders were on hand to protect the two leaders from an attack by two Nazi agents using an experimental growth formula.[20] Their one-on-one meetings carried on until June 22nd of that year.[21]

Later that year, when American ambassador John Lissam was revealed to be the Nazi spy known as the Creeper, President Roosevelt stepped in to sign a treaty between the United States and the nation of Alslavia, one of the last few neutral countries during the war.[22]

When seven good will ambassadors destined to the South American nation of Bonara were murdered by the Ambassador of Terror, Roosevelt sanctioned the Young Allies to go in their place, succeeding in security a trade deal to export rubber from the country.[23] Roosevelt later sent an official directive sending Captain America and Bucky to Hollywood, California to investigate Axis sabotage at Democracy Pictures, where a serial about Captain America was being filmed.[24]

Roosevelt soon became the target of a series of assassination attempts in 1943. The first was plotted by Nazi agent the Cobra who sought to eliminate Roosevelt, Churchill and Joseph Stalin during a meeting out in the Atlantic. This plot was foiled by the Sub-Mariner.[25] The next attempt was by Nazi assassin Jorgen Klein, who attempted to kill Roosevelt, Churchill and Stalin during a meeting in Tehran. This second attempt was soiled by Nick Fury and his Howling Commandos.[26]

Yet another plot by Nazi spies was foiled by the Patriot in 1944.[27] Later Roosevelt personally greeted the Howling Commandos during a Heroes Welcome ceremony during one of the groups brief returns to the United States following a mission behind German lines.[28]

When in a meeting in the West Indies, Roosevelt became a target of Nazi scientist the Zombie Master and his army of Zombies. This assassination attempt was prevented by the Sub-Mariner.[29] Later, when a lighthouse keepers attendant obtain a meteor fragment that could be used as a destructive weapon and offered it to the highest bidder, Roosevelt suspected that the Nazis and the Japanese might use trickery to obtain the weapon. To prevent this, Roosevelt sent Captain America and Bucky to insure that if the weapon did not end up in American hands, it was to be destroyed.[30]

When Captain America was captured by the Red Skull and Warrior Woman, military officials met with Roosevelt to explain the situation. With the risk of Captain America being killed and his death being used as Nazi propaganda, Roosevelt agreed to a secret plan that would see a man of similar physical characteristics take up the role of Captain America so that his death could be denied and Americans not lose faith.[31] While this protocol was not used during Roosevelt's Presidency it was later used when Captain America was believed to have been killed.[32][33][34] When Cap was returned, he and Roosevelt soon held a press conference with the media.[35]

Shortly before his death in 1945, Roosevelt and his wife Elanore listened to the Masked Raider radio program.[36]

On April 12, 1945 Franklin Roosevelt died from complications due to a stroke. When Captain America and Bucky learned of the news, Cap suggested that they wait until the war was over before they mourned the passing of the President, and draw inspiration from his life to win the battle.[9] Roosevelt was succeeded by Vice President Herry S. Truman who took up the Presidency following Roosevelt's death and led America through the reminder of the war.

Roosevelt was resurrected as a zombie along with the other deceased Presidents of the United States by Michael the Necromancer and began wreaking havoc in Manhattan. The mercenary Deadpool battled him and struggled for much of the fight against the zombified President. Deadpool eventually killed Roosevelt by electrocuting him to death using electricity from a rail and one of his katanas as a conduit.[37]

Like this? Let us know!
Retrieved from "https://marvel.fandom.com/wiki/Franklin_Delano_Roosevelt_(Earth-616)?oldid=6474869"
Community content is available under CC-BY-SA unless otherwise noted.