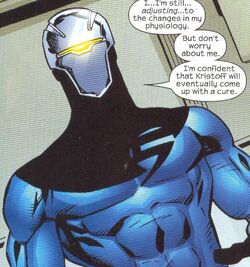 Franklin was a member of the Fantastic Five under the name of Psi-Lord. Following a battle against Hyperstorm his powers were reduced to only telekinesis.[2] He had a friendly relationship with Spider-Girl. They were mutually attracted to each other until her father, Spider-Man, pointed out that she was only 15 at the time, several years younger than Franklin.

After that, their relationship became platonic. It was revealed that Franklin recommended Kate Power to help the Avengers find the powerless Thunderstrike.[3] Later in order to fight the threat of Doctor Doom he underwent a huge increase in his powers, triggered by Cosmic Ray exposure that left him radioactive and with his blazing skull shining through his face, this also forced him to wear a containment helmet at all times.

Immense telepathic and telekinetic powers due to an additional dose of cosmic radiation.

Containment helm to shield others of his radioactive head and contain his powers.

Like this? Let us know!
Retrieved from "https://marvel.fandom.com/wiki/Franklin_Richards_(Earth-982)?oldid=6018165"
Community content is available under CC-BY-SA unless otherwise noted.