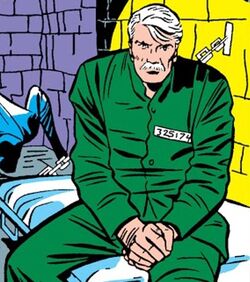 One of the greatest surgeons in the United States, Dr. Franklin Storm fathered two children with his wife Mary, Susan and Jonathan. [1] Not much is known about their family life, however Sue has stated that her parents often fought with each other and ignored her, this led to Sue feeling like she was invisible and became highly protective of her heart.[2]

While Dr. Storm was driving himself and his wife Mary to a dinner being held in his honor, one of the tires on his car suffered a blowout. As a result, the car swerved off the road and crashed, fatally injuring Mary Storm. Unscathed himself, Dr. Storm operated on Mary in a desperate attempt to save her life, but to no avail. Franklin Storm blamed himself for her death. He gave up his medical career and turned to excessive gambling, eventually having to borrow money from an underworld loan shark. When Storm proved unable to repay the loan in time, a criminal in the employ of the loan shark confronted Storm, and threatened to kill Storm and his children. Storm grappled with the criminal, and during the fight, the criminal shot himself. Storm was charged with manslaughter, and, still tormented by guilt over Mary's death, refused to say anything in his defense during his trial. Hence, Storm was sentenced to twenty years to life imprisonment. Wishing to spare his children further distress, Dr. Storm asked his daughter not to visit him in prison and to tell Jonathan he was dead.[1]

Susan and Jonathan Storm later gained superhuman powers and became known as the Invisible Girl (later Invisible Woman) and the Human Torch, respectively, both of whom were members of the team of adventurers called the Fantastic Four.[3]

Franklin Storm finally escaped prison shortly before the Fantastic Four once again encountered their enemy, the Mole Man. While the Fantastic Four escaped from the Mole Man's underground realm, Susan Storm was critically injured by a piece of shrapnel in an explosion. Franklin Storm emerged from hiding upon hearing of his daughter's injury and successfully operated upon her, saving her life. After completing the operation on Sue, Dr. Storm was taken back to prison.[4]

However, the Skrull warlord Morrat had a concussive energy beam projector strapped to Dr. Storm's chest before returning him. The projector was set to fire as soon as Dr. Storm saw the Fantastic Four. Seeing the team members, Storm warned them away and then rolled over so that the projector would fire its deadly blast at the floor. As a result, Franklin Storm himself took the full force of the concussive blast and was mortally injured. He died in the presence of the son and daughter he so loved.[1]

Many years later, when the Fantastic Four's Thing died in battle, his teammates traveled into the afterlife to rescue him. During their travels, Sue and Johnny were briefly reunited with their father and mother who were living in the afterlife. Franklin tried to warn his children regarding staying too long, but they were swept away before they could listen.[6] Ultimately, the Fantastic Four managed to petition their creator to bring the Thing back to the world of the living.[7] Presumably Franklin's immortal soul continued to live on in the afterlife with his loving wife.

Franklin Storm possessed the normal human strength of a man of his age, height, and weight who engaged in moderate regular exercise.

Like this? Let us know!
Retrieved from "https://marvel.fandom.com/wiki/Franklin_Storm_(Earth-616)?oldid=6128933"
Community content is available under CC-BY-SA unless otherwise noted.