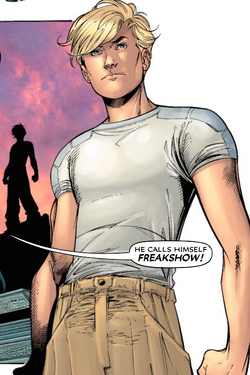 Freakshow was one of the few survivors of the island of Genosha after the Sentinel attacks on the capital of Hammer Bay. Somehow he found himself as the traveling companion of Wicked and became an unofficial pupil of Professor X. He soon proved his usefulness by ending a skirmish between the Professor and the local bully, Unus the Untouchable. Knowing that he couldn't do anything to harm Unus, Xavier had Freakshow swallow the man whole. Because of Unus' natural force field he was unharmed, albeit shaken, when Freakshow vomited him up later.[1]

During their efforts to rebuild Genosha, Freakshow took on a worm-like form and digested the debris of the shattered buildings to turn it into arable land.

Since the events of the House of M and the Decimation, Freakshow was depowered,[2] and later seen with a number of Genoshan mutants, including Unus the Untouchable and Wicked, where they were exposed to the Terrigen Mists which Quicksilver stole from the Inhumans to try to redeem himself and grant the world's mutants their powers back. However, the Mists had been shown to have adverse side effects. Freakshow was unable to change back into human form.[3] When government agents of O*N*E came in hopes of capturing Quicksilver, Freakshow was taken off the island alongside the last of the survivors on Genosha and returned to the States where his current whereabouts are unknown.[4]

Like this? Let us know!
Retrieved from "https://marvel.fandom.com/wiki/Freakshow_(Genoshan)_(Earth-616)?oldid=5194792"
Community content is available under CC-BY-SA unless otherwise noted.