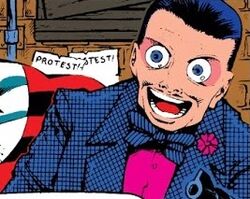 Frederick Balzofiore was once simply a low-level informant for the Delta City mob, but after being blinded in a darts game-turned-bloodbath between rival gangsters, he was turned into a cyborg by DoctOrangutan as one of his early bioengineering "projects," replacing his ruined eyes with artificial camera eyes. Taking the name Glass-Eye Freddie, he became a foe of Fight Man.[1]

Freddie teamed up with Metalhead and Triggerman Carr to mug a woman in an alleyway, but was effortlessly defeated when his victim reluctantly called for Fight Man, his cyborg eyes knocked clean out of his skull. However, the three enforcers from rival mobs working together provided Fight Man with his first clue that someone was attempting to unite all of Delta City's underworld. Fight Man took one of the eyes home with him, intending to sell it in an online auction as "supervillain memorabilia." While flying home, he dropped it on the highway, causing a car accident. [2]

Cybernetic eyes: Freddie's cybernetic eyes can be used as surveillance cameras, sending images of what they see into his rewired brain. This data can be preserved by means of Freddie removing his eyes and downloading the footage onto a computer.[1]

As one of DoctOrangutan's early experiments, Freddie's eyes are imperfect and buggy, and are prone to everything from imperfectly transmitting images to literally falling out of his skull if they don't lock into their ports properly. [1]

Glass-Eye Freddie was given a brief backstory and description of his powers on Evan Dorkin's tumblr, where he published the notes on Fight-Man's supporting cast that he gave to the Official Handbook of the Marvel Universe writers.

Like this? Let us know!
Retrieved from "https://marvel.fandom.com/wiki/Frederick_Balzofiore_(Earth-616)?oldid=6544200"
Community content is available under CC-BY-SA unless otherwise noted.