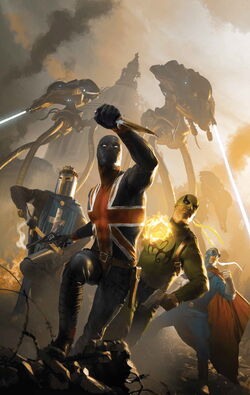 Base of Operations
Europe
Affiliations

During WWI a group of five heroes of unknown background fought together as the Freedom's Five. The team consisted of Phantom Eagle, the Crimson Cavalier, Union Jack, Sir Steel, and the Silver Squire. They waged war against the Germans, their allies, and their super powered agents, such as the vampire Baron Blood.[1]

By 1917, Freedom's Five included Iron Fist (Orson Randall) in place of the injured Silver Squire. The Five battled the invading forces of the Martians in London, finally repelling the invasion with the help of Eben Stafford and his Men in The Wall.[2]

Retrieved from "https://marvel.fandom.com/wiki/Freedom%27s_Five_(Earth-616)?oldid=5570823"
Community content is available under CC-BY-SA unless otherwise noted.