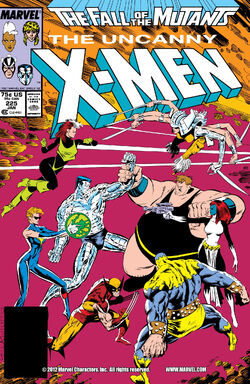 Freedom Force was created when Mystique and Valerie Cooper came to an agreement allowing the members of Mystique's Brotherhood of Evil Mutants to receive full governmental pardons for their past crimes as long as they followed Valerie Cooper's orders. The team's first mission included the arrest of Magneto. This brought them into combat with the X-Men at a Jewish Holocaust memorial. After the battle, Magneto was arrested and stood trial for his past crimes against humanity in a court in Paris.[1]

On their next mission, Spider-Woman was recruited by Val Cooper[2] and decided to join the team.[3] She worked with them opposing the mutant-hunting organization, X-Factor.[4] Quicksilver, a former Avenger framed his old teammates and the government wanted the Avengers to be arrested. Freedom Force did this with Spider-Woman's help. The truth was revealed and Spider-Woman felt guilty and freed the Avengers and then left the team forcing her to become a fugitive.[5]

Later, three other mutants were added to the roster: Super Sabre, Crimson Commando, and Stonewall. They had been hunting down criminals and executing them for their past deeds. The three vigilantes finally turned themselves in and accepted positions on Freedom Force.[6]

Over the course of the next few months, Freedom Force were used to enforce the Mutant Registration Act, bringing them into conflict with the X-Men and other members of the superhero community.[7][8][9] They had an antagonistic rivalry with John Walker, another Commission agent training to take the place of Captain America.[10]

Finally, during a mission on Muir Island, Destiny and Stonewall were killed.[11] This upset all the members of Freedom Force. Mystique fell into a depression and was seemingly killed by Val Cooper (under the influence of the Shadow King).[12] During a mission in Iraq, the team suffered greatly. Super Sabre was killed, Blob and Pyro were left in Iraq, and the rest of the team were badly injured. Due to the loss of most of the membership, the team was disbanded.[13] Valerie Cooper was still convinced that the United States government had need of its own team of superhuman operatives, a need that she was to later fill with a revamped X-Factor team.[14]

Freedom Force Helicopter, other air vehicles. Most of Freedom Force's vehicles had to be modified to accommodate Blob.[15]

Like this? Let us know!
Retrieved from "https://marvel.fandom.com/wiki/Freedom_Force_(Earth-616)?oldid=6078602"
Community content is available under CC-BY-SA unless otherwise noted.